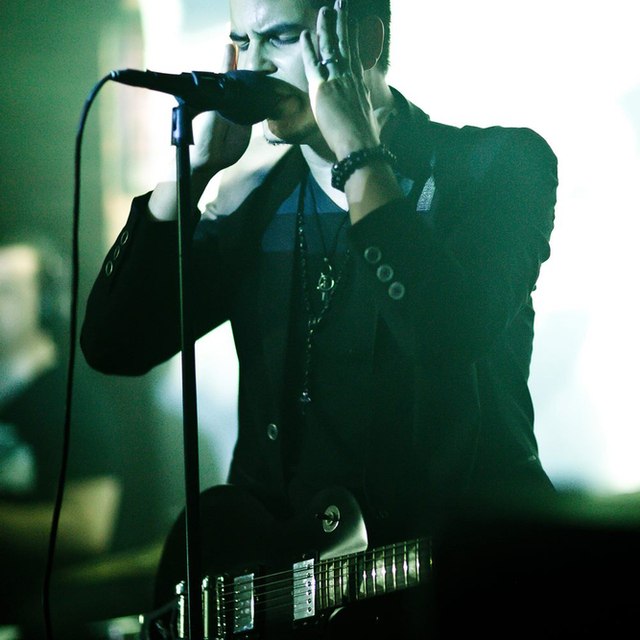 Johann Sebastian, the brain behind State of the Union; electronic band based in Los Angeles, California. Their debut effort “Black City Lights” inspired by the loyalist to the EBM and Dark wave scene fused together expressions and elements of philosophy, politics, love and symbolism through the medium of hard hitting and addictive dance music. This band emerged as a powerhouse in the alternative/electronic/industrial scene. Their unique blend of industrial-dance combined with more accessible forms of EBM with contemporary electronic styles and very deep, thoughtful, inspiring lyrics ranging from hard-hitting electronic beats to haunting ballads and Goth-like symphonic orchestrations.

Johann Sebastian, the singer and architect behind this multidimensional project continued to leap from strength to strength with his follow-up sophomore album “Inpendum” State of the Union earned an incredible acclaim for their very energetic and complete 3D audiovisual live performances and gained a fanatical worldwide following after that.

State Of The Union's name itself is an expression of Johann's outlooks, enveloping political overtones at the same time still resembling the rage and deeply sad emotion that he was initially trying to portray in his music. They felt it was only fitting to follow their own aspirations in pursue of their own musical scope. State of the Union has been level by many DJs and magazines as one of the brightest and most promising bands to explode onto the scene in quite some time; the album "Evol Love Industry" release in North America, Europe and rest of the world at the beginning of 2008 confirmed just that.

With pounding four on the floor and dance driven synth lines mixed with a powerful off the hook bass line that makes anything rattle, shake and move to its beat “My Time Away” the comeback after a well-deserved and needed 4-year hiatus represents the pinnacle in Johann Sebastian’s music production, mixing and mastering style and technique. With a phenomenal haunting and almost out of this world intro “Elevate” opens the door to an orchestration full of rich, blushful, exquisite sounds that can easily linger on in your ears for years to come if you are not careful to stop singing the magnetizing lyrics after you hear them, I promise you that, this song sounds almost surreal if it could be described visually.

Next the emotionally and moving theme song “My Time Away” which puts together the years of absence in Johann’s musical craft narrating an outer space mission gone wrong, this is an excellent track to start getting the blood boiling through your heart. the floor pounding bass line is in itself an expression of an altered more alternative way of expressing this feeling and/or emotion. An outer space theme song with super-groovy bass lines, pounding kick and emotional lyrics hunt your mind forever after you hear it for the first time is the best way to describe this song and I have to mention that this album is meant to be listened to in 5.1 or 7.1 surround system from start to finish for a full and better ear pleasing experience, trust me on this.

The song after is the short “back to earth” which is an orchestrated and almost melancholic piece marked by the recorded transcript from tower control back to lunar mission before hitting the stratosphere which is the perfect transition into “descent” an abrupt journey through the fast, hot, violent, rough rumbleness of a space vehicle going into the stratosphere in its descent back to Earth. To simulate an astronaut trying to think of something else meanwhile crossing the vastness of space we have “Stupid Song” which is a strong powerful bass driven ballad that talks about relationships gone wrong as well and how a stupid song sometimes helps to find comfort and suit the pain.

“Five minutes to midnight” is a song you will remember, Not only it has the formula that makes a great song an excellent song, it has the emotion and steer that will capture and involve all your senses every time you hear, you will never get tired of this song. “Five minutes” portraits a man in death row who is five minutes away from being sentenced to death by electric chair or lethal injection. This song is as haunting and emotional as it can be. This song is censored only for one reason, it is extremely catchy without falling in the trap of making it a gummy –pop predictable song, you have to listen to believe here.

Midway through the album we have “Miracles” an exquisite integration of more acoustic sound still in an electronic genre with saddened piano rhythms behind a melancholic vocal line that outcries all the pain and heart felt emotion of missing someone you love. A miracle is all we need to relive that situation one more time, and we believe it can happen. This song can be categorized as the Top-40 hit on this album. It is a song meant not only for the gothic, dark crowd. This is the answer to Robert Smith’s “Just like heaven” in a more melancholic kind of way.

“Dancing in the Dark” is not a song. It can easily be categorized as an anthem based on the eccentricity of its combination of music, melody and lyrics. It is not meant to work, it just simply works perfectly! With each time you hear it you are intrigued to find something new, different and improved from the last time. You can almost bet that you will be playing the bass line in your head for quite some time. The floor-remix of this song has to be played carefully as it will sure have people asking who that band is…

In a tale of romance lived in a lush and dark atmosphere across a dark Gothic forest of mystic and emotion that governs all feelings and separates our incarnated bodies from our souls comes “Eternally” Dracula’s love never dies ideology is alive with this haunting and memorable song that preys on the love of its victim when its heard. A definite floor anthem this year. “You and I could live eternally, One more chance is all we need to blend our lives forever…it hurts to be without your touch” what else do you need to feel the emotional expression on the lyrics in the lyrics of this song.

“Blue lights” is one of the last songs in this album, a tribute to Fictional a group that disbanded after only one album but left a memorable song for all of us music pleasure seeking lovers to have.