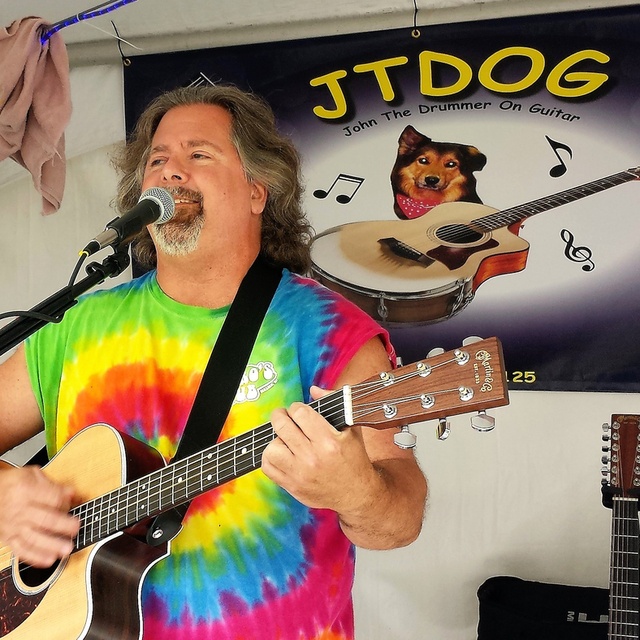 JTDOG (AKA: John Mueller) is a veteran performer to the local music scene. Mueller has performed in several area rock bands from the 80s through the mid-90s as lead singer and drummer. John is versed in several instruments, including the guitar. After a hiatus from performing live in the 2000s, John began performing as a hospice volunteer. Playing his guitar and singing for our deserving seniors soon became a passion. One thing led to another, and seeing the impact he was making, decided to launch JTDOG (John The Drummer On Guitar). John reaches out to all seniors with his therapeutic music and those with dementia, including Alzheimer’s Disease. Soon John quit his office job to pursue this mission full-time, and is becoming a favorite of seniors everywhere in the Fox Valley. JTDOG is now branching out to the public sector once again. What makes him unique is his genre of music; JTDOG plays familiar classics as well as the music you don’t hear other musicians play, and that’s his niche and what is refreshing about JTDOG. His range in vocals enable him to perform a wide variety of music as evidenced by his ever-growing song list. His voice adapts to emulate the artist he performs, and the heart he puts into his music is evident as you listen to him perform. Old-school country, classic rock, and those forgotten songs that will bring you back to a place you had forgotten about, make this performer a highly-marketable, easy choice for your establishment, event, or music festival.

Screen name:
John the Drummer on Guitar
Member since:
Aug 17 2011
Active within 24 hours
Level of commitment:
Very Committed
Years together:
5
Gigs played:
Over 100
Tend to practice:
More than 3 times per week
Available to gig:
4-5 nights a week
Age:
58 years

John the Drummer on Guitar: Acoustic 6 and 12-string Guitars & Vocals