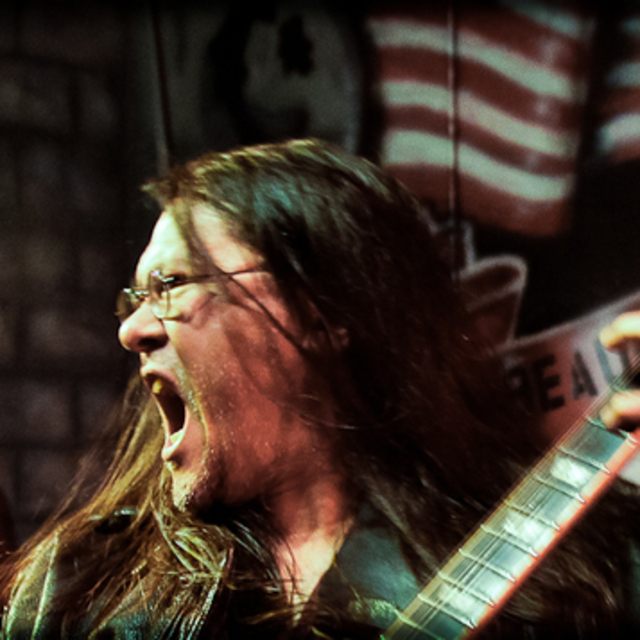 Have toured as guitarist at the major record label professional level.

More importantly, I've worked with indie acts who have successfully and profitably bucked the status quo in terms of gigs, style, pay, promotion and "fame." ... and THAT is what I am most interested in doing.

Current bands are a formative metal band in Charleston, and the reunion of Bounty Hunter. The latter band is long-distance, and the other guys are ball-and-chained so they don't do much and that is a real shame because record labels are looking at us. So, on with the new band.

If you want to talk nuts and bolts...

Music Business -alumnus of Peter Knickles' "Doing Music and Nothing Else" Music Business Seminar (If you're a serious player -or if you gig for money- then beat the bushes and find a copy of the home study version while they can still be found.

John Vestman's Life Success for Musicians - Google it. Get it. Complete it. And be honest about it to yourself.

Current Influences: the people whom I work with. My instruments.

Original guitarist with the Bounty Hunter guitar team (1982-1992, 2006; 2007-present as sole guitarist.) Also functioned as marketing manager, fan club administrator and lighting designer as well one of our music/lyric writers.

Our "Shadows" album was released in 1992. Bounty Hunter has opened for Foghat, The Outlaws, Mothers Finest, Blackfoot, and a host of other legendary bands. Our sold-out reunion debut in 2007 was as openers for Brian Howe of Bad Company, presented by Jeff Taylor and WGZO-FM 103.1. Many Thanks as well to WIXV 1-95 FM in Savannah, as well as Focus on the Coast (Hilton Head Island), Creative Loafing (Savannah), Charleston Free Times, and Lowcountry Underground Magazine.

I can tell you from decades of experience that dragging someone else who is talented but resistant toward real success (but tells you otherwise) isn't worth it. If they're incapable of learning and growing with this business due to ego, attitudes or emotional instability issues, then there's nothing that you can do about that and it's best to find more appropriate and capable people to work with because you're going to have to spend a lot of time with them one way or another.

If you're not a gentleman in this business, there's really no sense in doing it because jerks -and drunks- are a wasted investment of time, work and resources. More times than not, it's trying to weed through people who bullsh*t themselves and everyone else involved at some level.

Abuse me once, my fault for trusting. Three strikes rule here. That's a firm boundary.

Own several guitars but gravitate toward vintage Gibson Les Pauls and a hot Fender Stratocaster on stage.

1979 Gibson Les Paul Pro Deluxe (goldtop) with stock P90 in the neck position, Seymour Duncan Stk-P1 Stacked P-90 in the bridge position, Graphtek bridge saddles. Refretted by Mike Fisher (Guitar tech for Brian Stoltz, The Radiators and the legendary Funky Meters to name a few) in New Orleans in late 2003. Rudest and smoothest guitar in my arsenal. Neck pickup is god-toned. Look no further for slide guitar timbres. The only Deluxes made with ebony fretboards. This one has a quarter-sawn laminated maple neck with volute.

(Mike Fisher also set me up with a roadie gig for the "5th Annual Once In A Blue Moon Benefit Concert" featuring Buddy Guy, Dr. John, Allen Toussaint, Art Neville, and the late Timothea, to benefit HEP-C patients held at Tipitina's in New Orleans on Nov 15. 2003. "You don't know who Professor Longhair is? Boy, you're in New Orleans now so you'd better do some research." Taking Mike's advice, I did.)

1985 Gibson Les Paul Custom (cardinal red) w/Seymour Duncan SH-04 JB pickup in the bridge position. Revived from retirement in October 2011 by Ryan Nelson at Guitar Center in Charleston, SC. This guitar now melts faces in numerous ways -as it should. The JB pickup is perfect for mahogany-bodied guitars and uncompromised rock. Mahagany neck, no volute.

Randall and Hughes & Kettner amps. Still looking for a tube amp that will do everything that I need them to do and still sound and feel authentic. (Not into simulated amplifier tones.) Probably doesn't exist.

After the last band, I don't co-mingle PA gear at this point due to people not knowing what in the hell they're doing with the stuff. That may change but the guy running it has got to know more than the average wanker; YAMAHA SOUND REINFORCEMENT HANDBOOK: memorize it, use it.