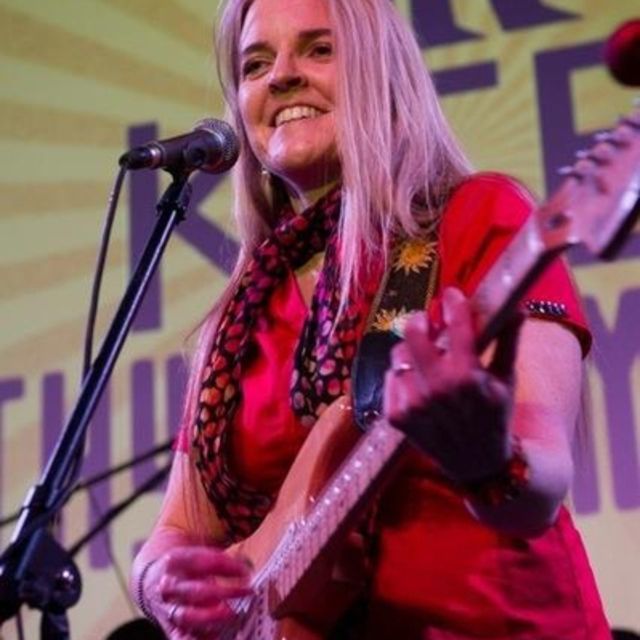 KTB Bio
Starting out as an acoustic solo artist back in 1990, there is no way Kathy Thompson could have ever fathomed where her musical journey currently resides. After spending decades honing her skills as both a singer and guitarist, she now fronts the 8-piece colossus that bears her name. Beginning with Kathyï¿½s soulful, bluesy singing style, she has amassed a supporting roster of musicians that have been described by the Hartford Advocate as ï¿½impeccableï¿½finely calibratedï¿½and tight.ï¿½
Behind Kathyï¿½s powerful voice, she is joined by a three piece horn/background vocal section consisting of Patrick Casey on trumpet and flugelhorn, Keith Lafond on both tenor & alto saxophones and flute, as well as Ski Choronzy on baritone saxophone. Joining Kathy and the horn players is Greg Benn on lead guitar and background vocals, in conjunction with the rhythm revolution that is Marco Santana on drums, and Paul Lebinski on electric bass.
Together, KTB, as they are collectively known, is an unstoppable force in any room, bringing an excitement that gets patrons out of their seats and onto the dance floor. Mixing old school funk, soul, and Rï¿½nï¿½B hits along with a complementary sprinkling of selections from contemporary artists, KTB is able to command any audience, young or old, and send their spirits grooving.
Throughout their tenure as a group, Kathy and her band have shared the stage with a myriad of national artists such as Joe Bonamassa, Roomful of Blues, The Machine, Matt ï¿½Guitarï¿½ Murphy, Shakedown, Johnny Winter and many others. The band has graced the stages of such celebrated venues as The Ridgefield Playhouse, Toadï¿½s Place, The Webster Theater, and the Wolfï¿½s Den at Mohegan Sun Casino to name a few. The current incarnation of KTB has been together for nearly a decade now and is performing at a level that exceeds the average ï¿½bar bandï¿½ one usually finds. KTB is a collective of skilled musicians hell bent on delivering the goods to any audience, leaving them exhausted from dancing and clamoring for more.

WHFD 125 anniversary
1-3pm on the beach in West Haven