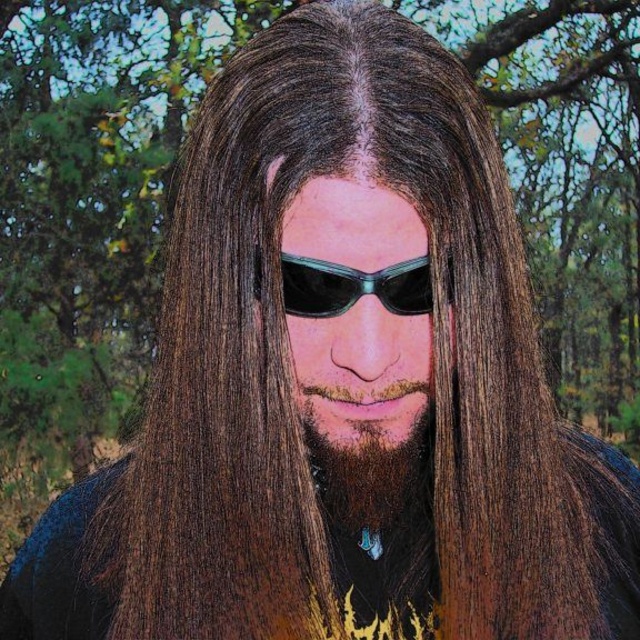 I will not be happy until I fufill this goal ! It's in my heart, It's in my soul! ...
anyways, sorry so damn long but I want to get the point over to exactly what I wanna be apart of in every detail possible ...

Undiscovered, Unexperienced, but determined metal vocalist willing to learn with open-minded and easygoing musicians. I've been a lyric writer straight from the heart for about 8 years now. I'ma screamer, howler & growler, and I can do clean vox too ... but I'd prefer to put at least 95 % of my vox into screamin' and growling, over clean singing, but clean vocals to throw in here and there 5% of the time, to amaze & shock the flocks! I PREFER ANGER over Beauty!!! but believe me, I got heart! I really wanna find a metal band and focus
all of my energy along with some like-minded, talented musicians!

But imagine being out in a wide-open field, and visioning huge black, obscure clouds rolling in from the North, before bringing chaotic winds and the violent doom & fear it brings. Or something real dark and behemoth like that twists and morphs into an outta control spin and brings visions of desolate and war-torn landscapes miles beyond miles! Gives you an idea what kinda style & sound I wanna be involved with, and punish on-lookers with, hehe. I can describe it as ... Armageddon War Metal! or Blackened Death
Thrash, with alotta melodies and 2 blistering guitars, harmonies & extreme blastbeats. Very fast & melodic where one guy does the Iron Maiden style leads, and the other guitarist does the intricate finger picking to make of a trainwreck twisting metal! Like those bizzare maniacs you see twitching fast inhorror films! A good example if the music sounded like a movie would be Silent Hill, combined with the most treachrous & blood-filled war movies/ Radio-Active Posessed Zombies under Burning Nuclear Skies ... Very defiant, fast, nightmarish and pissed-off, but well written with loud and up-to-date production, with some slower and mid-paced heavy doom thrown in every once in awhile for good measure. But, mainly 2 guitarists who can focus more on harmonizing!

I'm definitely searching for some musicians that want to stand out and do somethin' different, unique and diverse! I would like to find some metal musicians open to doing half Gothenberg style melodic Thrash and half Grindcore. It would sound very melodic and be chock full of beautiful fast thick riffage and grab the listener by the soul, but then turn on them throughout the songs and sound very intense, extreme and ugly(which would be where the Grindcore comes in !) Some beefy Meshuggah, fear factory, Strapping Young Lad or A Life Once Lost riffs would be bad as fu*k if I could find any guitarists who can do that style too!!!

I turned 28 in May of 06'. I've got transportation and an income and no girlfriend/wife and I don't have my child ... so I have plenty of time to put forth all my effort into this undying desire, goal & project!

I want to meet laidback metal musicians that enjoy their booze! ; ) So I 'm lookin' for ages 21 and over, and have the same mindset in the range of metal and goal... and not put all the pressure on one person cause were all in this together like family... One Strong Driving Force to take on the world!!! Again, I've been torturing my throat & gut and writing my own original lyrics for about 8 yrs now... I just wanna learn more about the inside from exp. musicians about recording & studio work ... That's why I'm here, willing to learn more beyond than just my knowledge of writing & doing vocals, but also about the music Biz, and finding my dream metal band too! Please, someone help me live out my dream along with you man!!!

The Gothenberg and Blackened Thrash influence style is what i'm mainly seeking out I would imagine would be examples of bands like :

A Lil' Industrial Metal(maybe thrown in) would be cool too if the other
members are open to having a keyboard player but not necessary :

fear factory, Meshuggah, S.Y.L., Ministry, Devolved, Red Harvest, Still Remains, A Life Once Lost, Mnemic & Raunchy so an Industrial Metal Keyboard player
wouldn't be to bad to add to the mix if the other members are open to it ...

My personal Vocal influences are :

Phil Anselmo, Burton C. Bell, Tomas Lindberg(At The Gates, Nightrage, The Crown, etc...)Kyle Symons(Malevolent Creation & Hateplow) Ben Falgoust(Soilent Green & Goatwhore), Max Cavellera, Henri of God Dethroned, Johan Hegg (Amon Amarth)Jesse Leech, Angela Gassow, Randy Blythe, Jamey Jasta, Kirk Windstein, Steve Petit(NoReturn), Dez (Devildriver only) And Myself ... And my influence on the clean vocals consist of : Chris Cornell( ol' Soundgarden days), Ronnie James DIO, Mikael Akerfelt, Howard Jones, Dax Riggs ... & Tim DeLaughter, my famous cousin, (NOT HIS VOX BY ALL MEANS!) and although he is not metal at all, I respect what he has done in his career and it's put the same drive and influence that runs in our blood!

I do have my own new gear... pro, but nothing real expensive or special( $ 800. oo worth) Two powered mixer amps (300 watts), a pair of 2 x 12" towered speakers and 5 microphones. Altogether it stands about 7 feet tall. I'd prefer hopefully someone in a band already has a PA system ready for
use at their practice space since I can't fit mine into my car : (