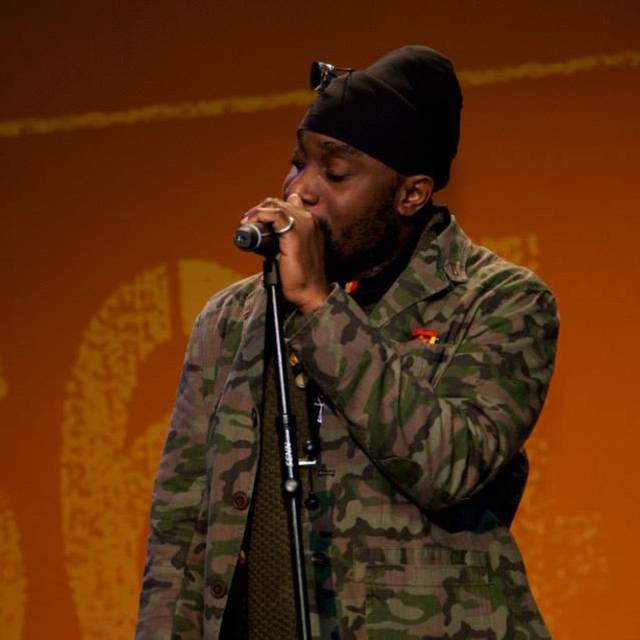 Jamaica is without doubt the foremost nation in the world for reggae! However the cultural, political and social climate tends to shape the musical offerings of this glorious nation.
Kokumo is a citizen and artisan from Jamaica whose debut album “Writing’s On The Wall” may well be the finest recording in the dub poetry vain for many a decade. Kokumo’s delivery will obviously draw comparisons to Mutabaruka but there is an originality of style that will appeal to audiences worldwide.

Described as not just an artist but also a cultural anthropologist and dub-griot, Kokumo uses his skills as a singer/songwriter and a dub-poet to capture his audience, whilst taking them on a cultural, spiritual and political journey.
He is considered a man on a mission, which has taken him to places like Brazil, America and Afrika. He’s also credited with sold out productions at The Rep. Theatre Birmingham, Vivid Arts and The Drum.

Hailed from the parish of Trelawny, known as the cockpit country in rural Jamaica, seemed to have contributed to the powerful voice that allows his words to take flight. With a name meaning, “this one will not die” in Yoruba, this is synonymous with the notion that his work will be around forever.

Kokumo’s work is rooted in the consciousness of Rastafarian and the cultural and social experiences of black people in general. This consciousness was triggered from an early age, which he credited to being around his Rastafarian cousins, but the full manifestation took on greater meanings at a later stage in life. He then began to transform his thoughts and observations into songs and poetry.

Kokumo has appeared at several festivals and cultural events worldwide, including Glastonbury Festival, Calabash International Literature Festival, Festival At The Edge. His work is published in magazines and anthologies, the most recent being 'Red', anthology of contemporary Black British Poet, edited by Prof. Kwame Dawes. His poetry has also been studied by French academia Dr. Eric Doumerc.

Must have own equipment