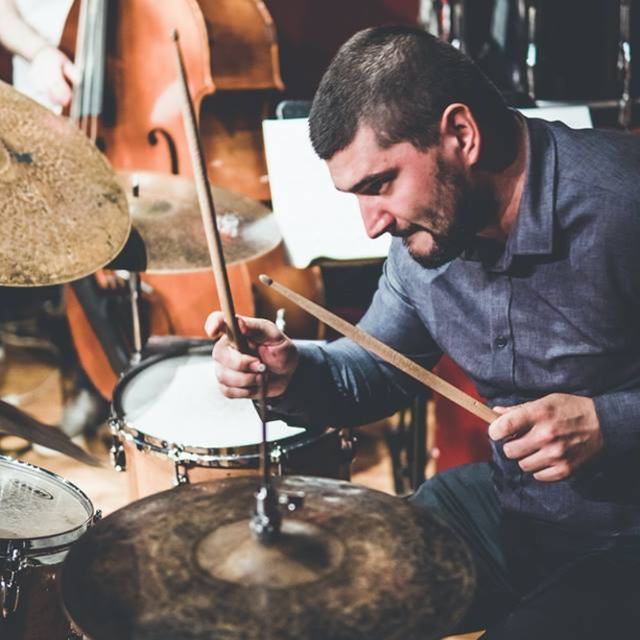 Sebastian Kuchczynski is a drummer, composer and arranger who lives in New York. He is an influential jazz, hip hop, funk, and pop drummer.

Kuchczynski began his musical education at the age of 5. In 1996 he started playing with a local Brass Band in Brodnica, Poland. He played in Latvia, Lithuania, Germany, France and Netherlands.
Sebastian began his education at the University of Karol Szymanowski in Katowice, focusing on jazz and popular music. That is where he met much accomplished polish and European jazz musicians.
In 2008 he received a solo prize in the Open category and a special prize for The Biggest Festival Talent on „I’st Tarnów Jazz Contest 2008". The prize was given to him by the leader of the jury John Betsch, who is known for working with Steve Lacy.
Next important event, was a first Grand Prix prize won in 2010 in the international jazz competition "XXXIV Getxo Jazz in Spain" with a Wierba-Schmidt Quintet, whom he also recorded 3 albums.
He began playing with the Polish-Cuban band called Recicl-G en Cuero, established by Yoilan Perez Harriette and where we can also find a great Cuban pianist Rey Ceballo. He was a co-organizer of "Film Jazz Project", together with Michael Patches Stewart, who knows from years of work with Tina Turner, Earth, Wind & Fire, Marcus Miller and Kenny Garret.

From 2016, he is a member of soul-hip hop band called "Radiostatik", established by Micha? Wróblewski. The lead vocalist Andre Washington, is known for working with artists such as Beyonce, Aretha Franklin, Jennifer Lopez and Raashan Ahmad - famous LA rapper.

In his professional career, Kuchczynski was 3-time nominee for FRYDERYK award in debut album category. Ola Trzaska "All Around" 2013 r. ; Przemys?aw Florczak "Image Of My Personality" 2011 r.; Biotone "Another Space" 2011 r.

In 2017 He moved to US in where he started to work with many great musicians witch included: George Garzone, Marco Pignataro, Danilo Perez, Joe Lovano,

He recently graduated at the "Berklee Global jazz Institute”.