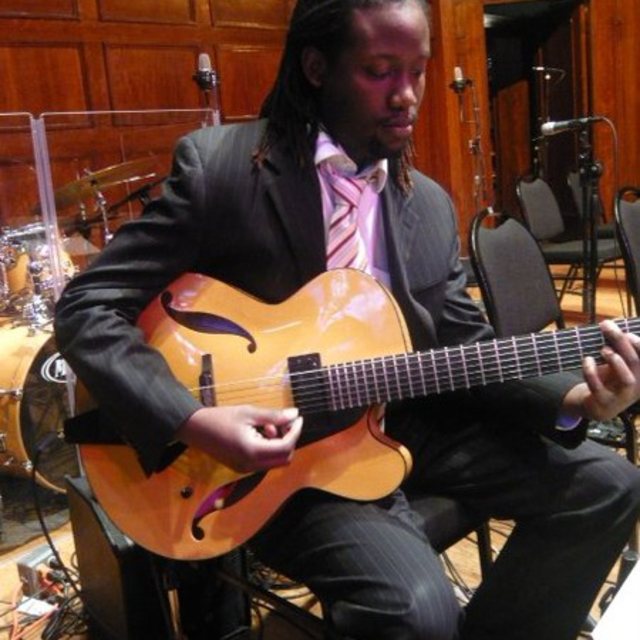 Falling in love with music is easy, and that was the case for a five year old boy from Venice, IL. At the age of five, Larry Brown picked up the guitar from his father and has not put it down since. Upon completing high school,Brown attended Southern Illinois University Edwardsville (SIUE) to study with legendary 7-string guitarist Rick Haydon. Through the years, he has had the opportunity to learn from jazz legends such as Pat Martino, Houston Person, Jimmy Cobb, Victor Goines, John Scofield and Russell Malone. He has also performed at some of the countryâ€™s greatest jazz festivals and venues including the St. Louis Jazz Festival, the Clark Terry Jazz Festival, The JVC Jazz Festival New York, Lima Jazz Festival (South America) as well as Dizzyâ€™s Club Coca-Cola. Brown is a very versatile musician. He has worked as guitar chair for the plays Color Struck and High School Musical and has recorded on gospel albums with artist from the St. Louis Metropolitan area as a guitarist and an organist. Additionally, he has performed with Hamiet Bluiett, Louie Bellson, Lew Soloff, Benny Golson and Curtis Fuller. A Betty Carter Jazz Ahead Alumni, Brown just received his Masters from Northern Illinois University whee he studied with jazz notables Fareed Haque, Willie Pickens and jazz educator Ron Carter.

Screen name:
Larry Brown Jr.
Member since:
May 12 2009
Active over 1 month ago
Level of commitment:
Touring
Years playing music:
20
Gigs played:
Over 100
Tend to practice:
More than 3 times per week
Available to gig:
6-7 nights a week
Most available:
Mornings