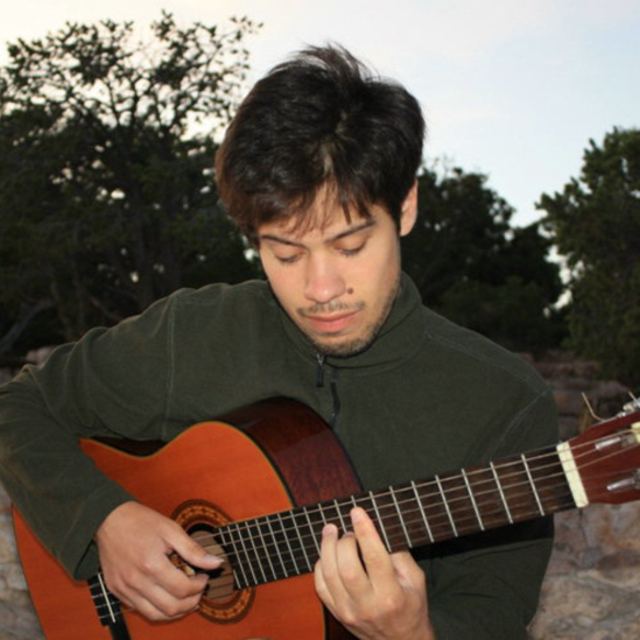 Leon Muhudinov is a guitarist-composer-educator based in NJ and NYC. Described as “an artist worthy of well-earned name recognition and one of the most versatile guitarists around” by 20th Century Magazine, he can be heard performing classical guitar, boom chick, world fusion, prog rock, and jam band music.

Leon has contributed music to independent films and National Geographic documentaries dealing with animal rights, environmental, and humanitarian issues. In 2011, he was featured as a composer for Project Oliver, a series to build improved spaces for rescued primates such as Oliver, "the missing link" chimpanzee. He also performed for the Global Human Rights Torch Relay and Edison Wetlands restoration benefit.

In 2012, Leon was featured on the Van Halen Tribute album, Take Your Whiskey Home, alongside current/former members of Aerosmith, Journey, Black Sabbath, Dio, and Yngwie Malmsteen band, released on Versailles Records. Other compilations include Guitar Wizards Vol 3 in 2014 and upcoming tributes to Queen and Deep Purple.

As a recording artist, Leon has worked and appeared on recordings alongside members of Chuck Berry, Journey, Dio, Whitesnake, Garden State Opera, and Metropolitan Opera. He performs solo, with his duo Combo Combo, and other ensembles regularly throughout the Tri-State area.

Passionate about sharing the gift of music, he maintains a busy schedule of guitar students, mentoring dedicated guitarists, singer-songwriters, and wonderful people from all walks of life...

"Guitar trip into the unknown of the great wide open. Not afraid to touch and embellish classic material from the likes of The Fabs and Duke Ellington on his 2003's debut, "Tasty Guitar Lines", this time New Jersey resident Leonid Muhudinov walks his own way with a variety of stringed instruments on his back. Running in with a streamline rock 'n' roll with Beethoven lurking in the shadows, there's a filigree technique on display with no sign of showing off, especially when electricity breaks down into acoustic reverie. But if jazz, country and classical guitar pieces can be expected from the master, the jangly twangy beat of "Ghost Town" comes on as delicious surprise: Hank Marvin has never been so cimenatic - and there's more to the composition, much more! And there's much humor in here, be it Hendrix-cum-Hazel-Hackett transmutations in "Funky Bitch", lush but playful guitar pile-up in "Leonid's Return" or electric sitar of "Samadhi". Highly enjoyable record of rare elegance."

"What makes of Leonid a cooler cat than those guys is his eclecticism. The tracks included here variate in shade, hue, heaviness and level of exposition; he seems destined to switch moods because that’s his mission. He can play the guitar, but can he hold out attention? This stuff says Yes, and that’s more than most guitar albums can sound off with a straight-note."