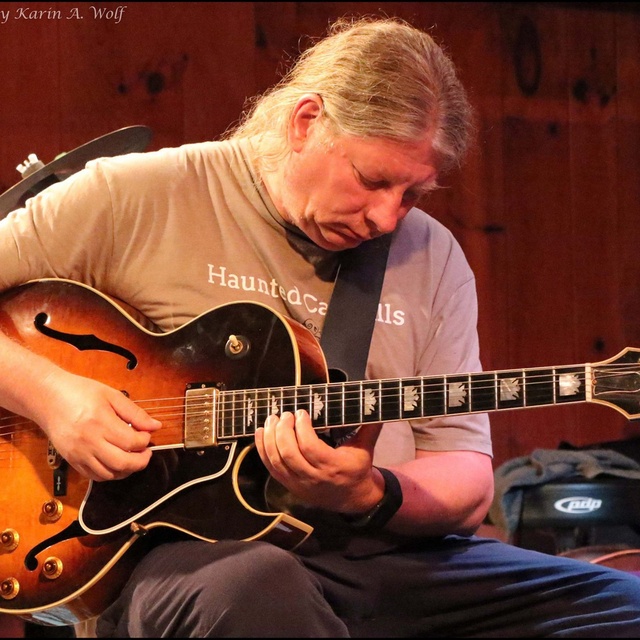 Guitarist Rick Warren is based in Hudson, NY. Originally from Kingston, NY, Rick's earliest musical role was playing trumpet in his school band. When Rick discovered rock and roll, he knew that the guitar was to be his 'axe'. He was influenced by Jimi Hendrix, Pete Townsend of The Who, and later by Larry Coryell and the Mahavishnu Orchestra's John McLaughlin.
Throughout the years, Rick has been involved in the Hudson Valley music scene in many musical settings from power trios to jam bands and folk groups to singer-songwriter collaborations.
One area that Rick has been very involved in is the improvisational and experimental music movement led by Karl Berger of the Creative Music Studio in Woodstock. Berger's visit to a music theory class that Rick was attending inspired him to become a regular participant in twice yearly workshops held at CMS. Rick is known for his soundscape compositions using his guitar and a variety of electronic sound sources, each one a new and different creation.
Rick is also involved with the Woodstock-based Hudson Valley Soundpainting Ensemble, which has grown out of a series of workshops let by bassist Steve Rust.
Currently, Rick is quite active with the Kingston based 'Clouds' band, playing with Marilyn Miller as the duo 'Rick & Marilyn', and with Hudson based musical collective 'Sweet Life'. He can found most Tuesday evenings on the stage of Club Helsinki in Hudson, performing his own compositions or musically assisting many local performers.
He has a reputation as a rock-solid supporter who can be creatively joyful when the situation calls for it.
Like many guitarists, Rick owns over 20 guitars, but as he says, he only plays "one at a time". Always infatuated with sounds, he often finds himself making music with things not conventionally thought of as musical instruments: rubber bands, Slinkys, rulers, door knockers; it has been said 'he can make anything sound good'.

Below are my responses to some '13 Questions' interviews from the Prepared Guitar blog:

What do you remember about your first approach to sound?
One of my first musical memories is of a time I spent an afternoon 'playing' the piano at my grandparent's home in Pennsylvania. Later in life, I was 'drafted' into the elementary school band after showing extraordinary proficiency at the 'flutophone', a sort of white plastic recorder. I played the trumpet for three or four years, until I heard rock 'n roll, then all I wanted was an electric guitar.

What is the main pleasure of the strings? What limitations?
I don't think of, really, any sound source as being limited. I mean, if we look at something and our thoughts are only of what we cannot do with this thing, how will we ever find out what we can do with it? I love to warp the sh*t out of what might be the sound you might think should come out of the guitar, but I think, anyway, that somehow whatever I do with the guitar retains some 'guitaristic' qualities. I guess the main pleasure is to feel the vibrations, feel the sounds - that any source makes.

Rick and Marilyn at China Rose, Rhinecliff, NY, Saturday, April 15, 2017. Take a break from last minute taxes, have some delicious Chinese food and listen to Rick and Marilyn's mix of original and classic songs.