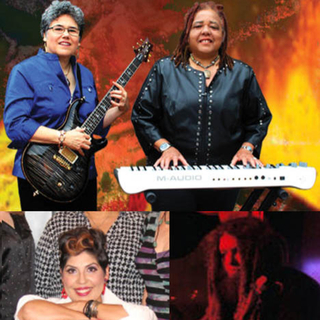 We are into pop, funk, jazzy-R&B, rock, & Indies, write and sing all our own tunes (.liquidgirlfriend). We'd like a second bass player and a second drummer.

We do our own sound at many gigs. Have 15-inch JBL EON 515 speakers and monitors with Mackie 1640 mixer. We use 2 to 3 keyboards for one keyboardist, including Juno Stage piano. Guitarist uses either PRS ME Quatro or Gibson-Les Paul 1960 Reissue.