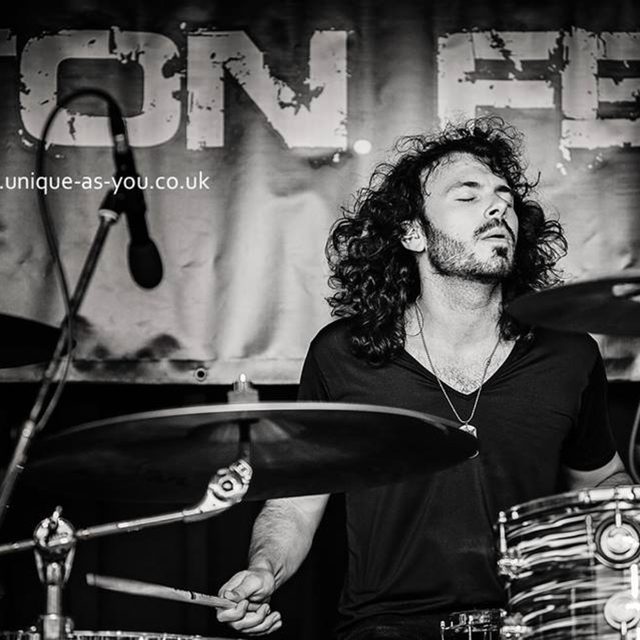 In High School Logan learned techniques on all large and small concert and world percussion, mallet instruments, and drumset. In his junior year he was named section leader and auditioned into the All-State Symphony Orchestra, placing him among the best in the state. He graduated with honors and received the John Phillip Sousa Award for Superior Musicianship, dependability, loyalty, and cooperation.

Logan accepted a full ride scholarship to The University of New Mexico and quickly became “the go-to percussionist”, playing in Classical, Contemporary and Jazz ensembles. Soon the road called and Logan joined internationally acclaimed Corporate acts, traveling throughout the USA, Canada and the Caribbean, opening for John Legend, Josh Mendes, Bea Miller, Eddie Money, and many others. He toured extensively with several musical acts, playing universities and music festivals across the nation. While home he managed to win the local Guitar Center’s Drum-off competition twice. He quickly became a strong force in the music scene, freelancing for several popular local, national, and international acts. Between 2013 and 2016 Logan has played over 350 European tour dates with Guitar Player Magazine's 2013 Best New Talent and The European Blues Awards Best Guitarist, Ryan McGarvey.

Logan maintains a very busy performance, recording and teaching schedule. He runs his own studio where he performs, engineers and produces award winning music. In 2013 he performed, mixed and mastered the "Best Instrumental Performance" at the NMMA's and received several other nominations in the Jazz and Native American Categories. In 2015 he engineered, produced, and played drums on the "Best Vocal Performance" and was nominated for "Producer of the Year" and in the Jazz category at the NMMA's. He works with clients all over the world providing drum tracks and post-production.

I have 6 different kits to cover just about any playing situation. Lots of cymbal and snare options. LP classic Congas and timbales. Also an Electronic setup of Roland Spds-x Sample pad with acoustic kick and snare triggers, and external kick and snare pads. Studio Rig are converters/clock from Antelope Audio and UA. Preamps are UA, Warm Audio, Focusrite ISA and Ampex. Mics from AKG, Rode, Shure, Audix, and Telefunken.