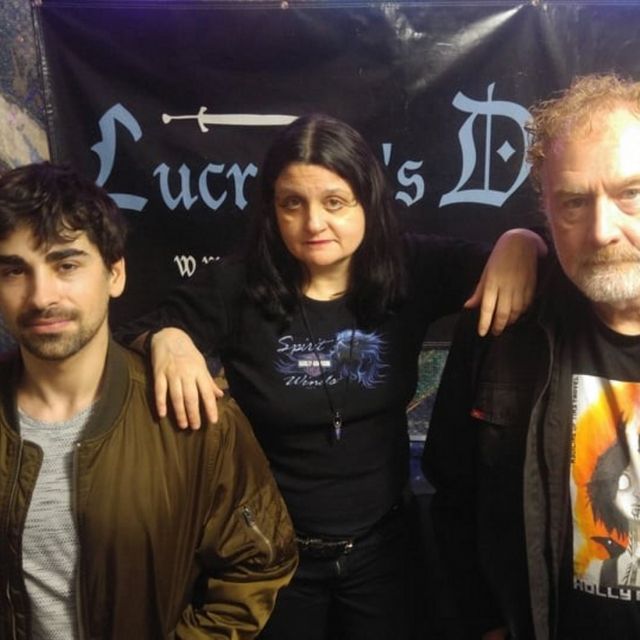 Note: This is a garage band. Please don't ask us to pay you!

Lucretia's Daggers "dark lyrical electro-rock": snarky metal, rock, goth, synth, pop, punk mix -- is a fun and committed bunch of 30+ year old musicians looking for a synth drum player/backing tracks producer. Practice space in Watertown is free and currently on Sundays 6-9pm. We play clubs in the Boston/Cambridge/Somerville area. We participate in radio interviews, have merch (CDs/EPs/MP3s, stickers, buttons/magnets, patched, earrings/necklaces/keychains) and have both live and professional music videos (see "Public Transit": s://./watch?v=ac1rRZGp_R0 and "The Horrors of Retail": s://./watch?v=9a2-7vW8HkU) and are working on "Lonely Island" from a Massachusetts Cultural Grant we got in 2021.

Here's what we're looking for in a bandmate:

1. Synth drummer OR drum tracks producer with proficiency and ability to collaborate and improvise in composing new songs (knowledge of sequencing software: Reason, Logic, Ableton, etc.) essential; ability to create and edit instrumental loops in real time preferred
2. have or will get your own electric drums/keyboard (with sampling capability preferred) – OR – manage our laptop and software (Reason)
3. have own transportation
4. have prior experience working with musicians/are a team player
5. have performed or want to perform on stage
6. are able and willing to perform live a few times a year in Boston area, New England, someday NYC
7. can meet 1x/week for practice (currently Sundays in Watertown MA)
8. wish to record with the band
9. can look & dress the part (arty/dark rocker/gothic/apocalyptic/futuristic)
10. are willing to have pictures taken/be in videos with the band
11. aren't in another band/have too many family/child commitments/are actually available to play out, and
12. like our music!
(Think The Clash, Fiona Apple, NIN, Dresden Dolls, XTC, X-Ray Spex, Marilyn Manson, Muse, Brian Eno, Zakk Wylde, Steve Vai, Garbage, Lords of Acid, Dead Can Dance, Portishead, HUMANWINE, Human League, BB King, Depeche Mode, Machines of Loving Grace, System of a Down, Metallica--yes, all of that!)

Here's list describing the type of person who would work well in LD:

* progressive/socio-political
* environmentally green
* think religion is a joke
* believes in science & is Covid safe (get vaxxed!)
* sick of being screwed by the system
* love female-fronted rock
* several years of experience playing out live
* interested in recording
* not looking for money (that's what day jobs are for; if we get paid, everybody gets a cut)
* backup vox (alto range at least)
* creative flair
* reliability/availability
* Bonus: vehicle with space for spare passenger
* Bonus: web editing, social media savvy
* Bonus: recording skills, equipment, space

Please check our:
1. , be, Reverbnation, and Website to listen/watch, and
2. Be prepared to submit previous work as examples before contacting us.

P.S. Please ACTUALLY be available. It is exhausting to replace people who realize they cannot commit to the project.
P.P.S. Angry trolls will be ignored. Please don't bother us if you just want to complain. Thank you.
do NOT contact me with unsolicited services or offers

=>DONNI DARKO (bass/backing vox): The Clash, Joy Division, The Black Keys, The Beatles, The The, HUMANWINE, and a thousand others

=> LUCRETIA X. MACHINA: Once upon a time, adorned in black and white attire at one of this hostess' many infamous Samhain (Halloween) house parties, I bore a silver poison ring inherited to me by my mother. (Why my mother would own and give me such a ring remains a mystery.) An admiring guest instantly proclaimed me "Lucretia" after the legendary Renaissance matriarch of the Borgia clan. A patroness of the arts, Lucretia Borgia (aka Lucrezia) was accused--amongst other things--of murdering her enemies "black widow" style in her bed (via foxglove digitalis poison powder) from such a ring. Bearing the name of a defamed victim/victimizer like a scarlet letter, the name Lucretia stuck to me like black duct tape and has fueled the music of this woman scorned and has since served as a siren of warning. As for the "X. Machina," well, she's in and out of the machine...that's all I can say. Join me and the Daggers as we entreat you to revel in our dark lyrical electro-rock...for the apocalypse.

=>DONNI DARKO (bassist): is the founder, lyricist, and bassist of alternative Boston band TALL In the 1980s, he was a Spit/Axis Boston club doorman and occasional fill-in DJ including for a sold out Divinyls show of 2,000 attendees at Metro. Also DJ'd Human Sexual Response and the Buzzcocks at Spit. Disappeared during the 90s, reappeared in 2K doing various private DJ gigs around town, he also wrote for the Boston Noise magazine for short time. In the 2010s he decided to play rock and began TALL, "playing out every two years whether we need to or not". A long-time fan of Lucretia's Daggers with burgeoning backing vocals to his credit, he is now a valued member of the band.

=> MAXX CHARVELLE (guitarist): After 8 years of failed attempts to learn how to bow a violin, Maxx Charvelle settled for the vastly easier electric guitar, allowing him to simply pluck and hit the strings without any discernable technique. Hidden behind layers of distortion and reverb, his erratic and dissonant melodies seek the approval of an intoxicated and distracted audience. Nocturnal by nature, he can oft be spotted wandering the streets between 2am and 4am.

=> FOUR (backing tracks/laptop): FOUR was hesitant; he/she didn't know whether to commit, but once they were "plugged" into LD (conveniently, via port #4), and got a taste of his/her bandmates' adoration, FOUR just HAD to be a member of Lucretia's Daggers.

In this advanced age of technology, FOUR is a valued and valuable member of the LD team. The future is ever changing, however.

FOUR may yet prove obsolete...if an organic lifeform can rival his/her prowess. If you have the biochemistry to challenge FOUR, contact us!