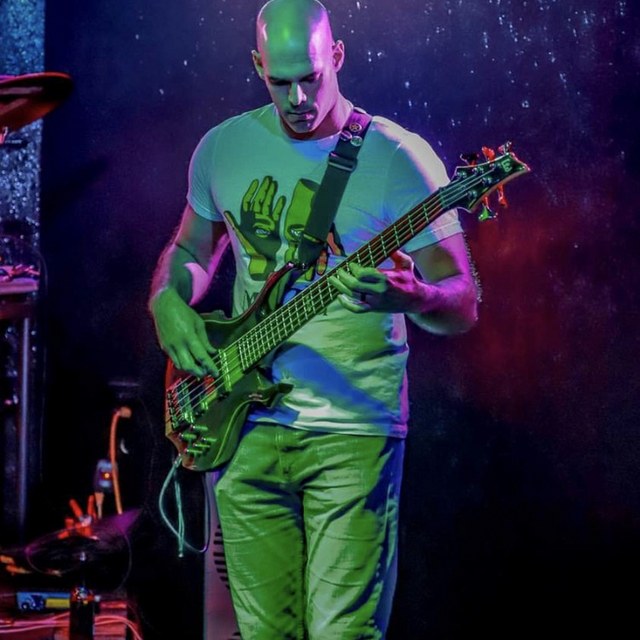 I've been playing bass for about 20 years. Started out playing for my high school band. Then moved to Colorado and played in a rock band called Johnny Jazzkill. We sucked but I learned a lot! Moved to Oklahoma. Joined a funk/fusion cover band there, the old school 70's stuff that still had soul. Moved to Omaha and played in various bands, the Shidiots, Jury of the Condemned, Megaton and One for the Outcasts (punk, hardcore, and doom metal) before moving back to Oklahoma where I played some more metal and Christian rock. Back in Omaha now, I’ve got a cover band called Simplicated and a Dave Matthews tribute called Alligator Pie, but I’d kind of like to do originals again.

4 Stringers: Homemade copy of a Carl Thompson, 83 Alembic Spoiler, Musicman Stingray, and Warwick Corvette fretless.
5 String: Ibanez BTB and Ibanez EHB
Uprights: 53 Kay and an NS electric upright.
Amps: Ampeg head with Ampeg 8x10 cab, Fender clone of a Sunn 300T with 4x10 and 1x15 Ashdown cabs, but for most gigs I use a Darkglass head with a little 2x12 Alusonic cab. For guitar I have a Jet City tube head with a Behringer 4x12 cab.
Effects and such: Too much to list. All the essentials, a few weird one-offs, and a Helix.
I also have a decent PA system. Have a 70's slingerland maple drum set and a ton of mics for recording as well, although I don't really play drums much myself.