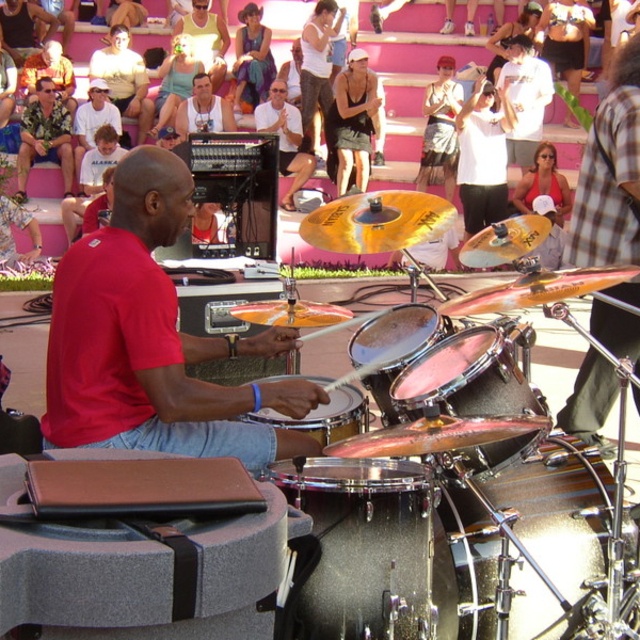 After many years of playing and instructing as a drummer I've enjoyed great experiences worldwide. In 2008 fall I concluded touring worldwide with a award winning Blues band (.bluemercy). More recently I have kept busy locally performing with a Houston based Blues Band and various other R&B, Jazz, Latin Jazz and church groups. I enjoy and work in a variety of genres, ranging from blues to funk to Christian rock to latin jazz to alternative to heavy metal/rock to R&B etc...! Currently I'm involved in a new project with a new band, STONY & HEMP home based here in Houston, Tx. We will perform our debut gig at BAYOU A DRINK, Spring, Tx on February 18, 2012 from 3pm ~ 7pm . It's the MARDI GRAS PARTY ALL on the Saturday following Fat Tuesday! We will bring a fresh and explosive show to this Mardi Gras gala. Our music is a blend of Soulful Blues, Rock, R&B, Funk and Gospel. We simply play Good Music that will touch all those who attend ... we want everyone to come and Party, Dance, Eat, Celebrate and thoroughly enjoy themselves from start to finish! Please continue to check here for upcoming tour dates and locations for STONY & HEMP!

As a teacher I am focused on beginning level students who need a good foundation in the basics as well as working with intermediate level students who are looking to improve certain aspects of their playing. I enjoy working in the studio environment and look to do as much of that in the future as possible. I am passionate about my craft and feel very fortunate to have had the experiences over the years and looking forward to putting the pedal to the metal over the next 5 yrs, both in the studio and in live performances. What a Fantastic way to spend a lifetime ... Music is the Message!

check me out at: .simplytightgrooves

The list would require more memory than available here, however; I will have to identify those that go me started, Mom, my Pops, my grandmother, my best friend's older brother(he was my first influence and teacher), all my instructors, many of my fellow bandmates over the years and some really down-to-earth drum center owners and staff. As for the drummers who've influenced me, well to simplify this let's just say from Buddy Rich, Max Roach, Art Blakley, Bernard Perdie, Billy Cobham, Tony Williams, almost all of the funk and R&B drummers of the 60's & 70's, the hard rock drummers of the 70's, John Robinson, Dave W., Omar Hakim, Dennis Chambers, Yogi Horton, Vinnie C., Alex Van Halen, Stewart Copeland, Steve Jordan, Tommy Igoe, Gregg Bissonette, Horacio Hildalgo, Alex Acuna, Tito Puentes, Greg Hayward, Philly Jo Jones... in short I've listened to as many of these people and more as I could over the years. Locally I've been motivated by my current teacher, George Wiemer and several monster local players, Mark Simmons(Al Jarreau), Chris Dave(Modern Drummer cover July '06), Earnest Walker, Matt R. Johnson, Cory Tice, Trevor Root, John Feldmann, Patrick Kelly, Eric Porter, and recent Guitar Center Drumoff Finalist at the National event Isaiahs Gil. On tour I've met many fabulous drummers but several who had a great affect on me are Mike Aubin, Big Eyed Willie Smith and "Mo" of the fantastic Lonnie Baker Brooks Blues Band ... these guys were very humble, encouraging and supportive and have remained influential in my life. I've been influenced by students as well; it's not always the accomplished players who are able to inspire when you truly love this craft and respect the work it requires to excel in this profession. I'm grateful to all of them for everything they've afforded me as a drummer, a musician and a human being!

Overseas Blues Tour May 17 thru 22

Gumbalaya's, a new southern cajun style restaurant that will also feature live music. Start time will be approx. 9pm ... burning it up 'til around 1am. So put on your dancing shoes, grab a friend and let's start this venue off right! Tickets are $10 in advance and $12 at the door. Should be a real "right" kind of night for those who want to hear some Hot Texas blues sung by one of this year's Blues Music Awards nominees in the category for Best Traditional Female Blues Artist category. Come out and see what all the fuss is about!!