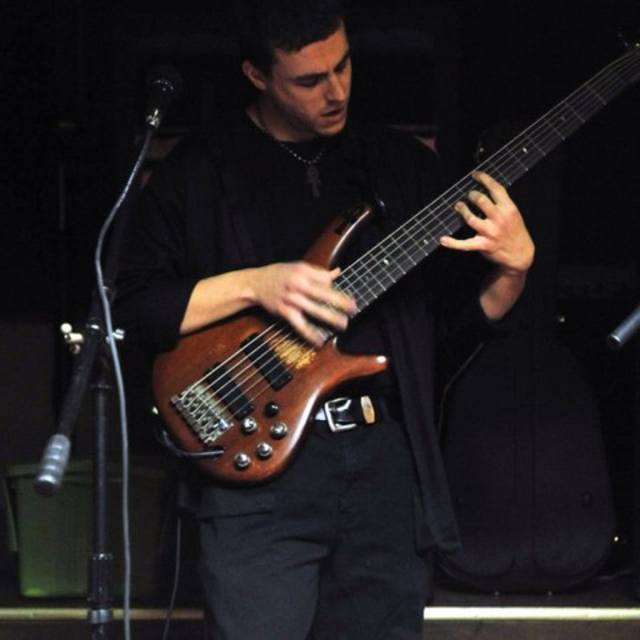 A long, endlessly evolving musical journey has come to this. From straight out of the dark depths of the metal scene comes bass virtuoso Mark McAnaney into jazz fusion. The early years brought him through several metal bands but all-in-all he was dissatisfied and needed to bring his unique voice elsewhere. He considers himself somewhat of an abstract artist of music as well as a technical craftsman, and his music itself tells subconscious stories of mysticism, spirituality, and ancient mysteries.
The crossover into jazz fusion officially came in 2007 with the first and second albums being released back to back, "Mystic Frequencies" and "Crossing the Line", which contained a lot of experimentation with many things to find his own true voice. These albums lead to being signed by Zoomoozic records! After those releases came the first instructional videos for bass, which are soon to be replaced by a much better series soon!
In 2009, third album "Earthshine Prophecy" finally arrived at his signature sound in mature form, which contains intense speed slap, dark haunting atmospheres, Eastern sounds and timings, and funky grooves. This in turn lead to live performances beginning in 2010, which have been going extremely well! Then, an article series was started called "Notes From A Bass Guru" on varying music related topics. (Available at ://.notesfromabassguru.blogspot) A music theory book entitled "Musical Science: Basic, Advanced, and Experimental" is also being written as we speak, as well as a bass method book called "Bass Science (A Complete Bass Method)." He also does work as a session bassist.
This project is the rawest, most personal, and most technical material released to date. It is a true expression of art and total freedom that started out as just an experiment gone so right and the blending of many musical styles in order to create a formless, genreless, and labelless type of new music...my OWN music!