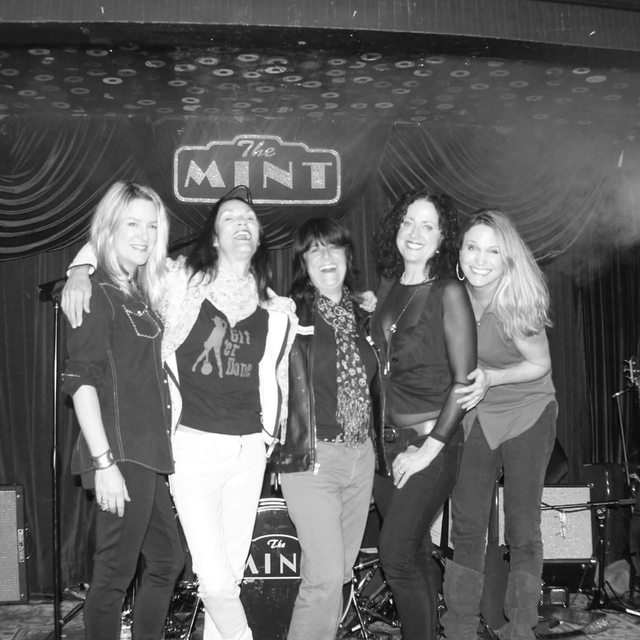 Fronting Git‘erDone, vocalist Josie Cutting has been compared to Chrissie Hynde and has also covered Miranda Lambert’s “Little Red Wagon” and the hit song “Telescope” from the TV show “Nashville”. Cutting, self-taught and hailing from New York, is equally at home singing rock, pop or country, and credits her father with instilling a love of singing in her at an early age. She relates that as a child she used a hairbrush as her microphone, but she’s since moved on to real microphones from which she belts her wide repertoire of songs. She loves telling a story in song and has done so all over the country to wide acceptance and acclaim

Sarah Blanch resides on the Westside, Venice Beach. She played violin growing up in Salt Lake City. She played guitar and violin in The Luca Band for 7 years and now plays fiddle in “Giterdone”.
We sometimes call her “tall girl”. Is she tall? Well, I gotta look up. She tears it up singing
and playing “Devil Went Down to Georgia”.
Wendy Colton has been playing drums since she was a pup back in Ohio. She has played in Cause for Concern, a band Nancy Luca shared a plane ride with up to the 2000 Rocker Girl convention and is our Giterdone drummer holding down the beat with a beautiful infectious smile that holds us in supreme bliss every show. I'm talking Big Energy Big Love here.
Montreal born and Berklee College of Music educated Marika Tjelios is a Los Angeles based composer, musician and sound artist, and she has provided music for award winning documentaries as well as network television shows and commercial ad campaigns. She has also worked alongside other artists including Mary Sweeney and Alex Cox, she’s toured with Men
Without Hats, Melissa Ferrick, Gogh Van Go, Sue Medley and Jariya, and in addition is bassist for the highly regarded local band Leda Atomica, named “Best of…” in numerous music publications.

And now the brain child of Giterdone, guitar extraordinaire Nancy Luca. Raised in the heart of gator country Gainesville Florida, Nancy learned how to play guitar at an early age. Taking lessons from guitar great Mike Campbell of Tom Petty, Nancy went on to open for such greats as Rick Derringer and then toured with guitar legend Bo Diddly. Since moving to California Nancy has released two solo cd’s on her own record label Gatorville Records, formed the Nancy Luca Band, played with several all female tribute bands such as Whole Lotta Rosies, Mistress of Reality and Lady Zep to just name a few. Now Nancy has formed Git’erDone, a country roots rock band. Back to her roots!