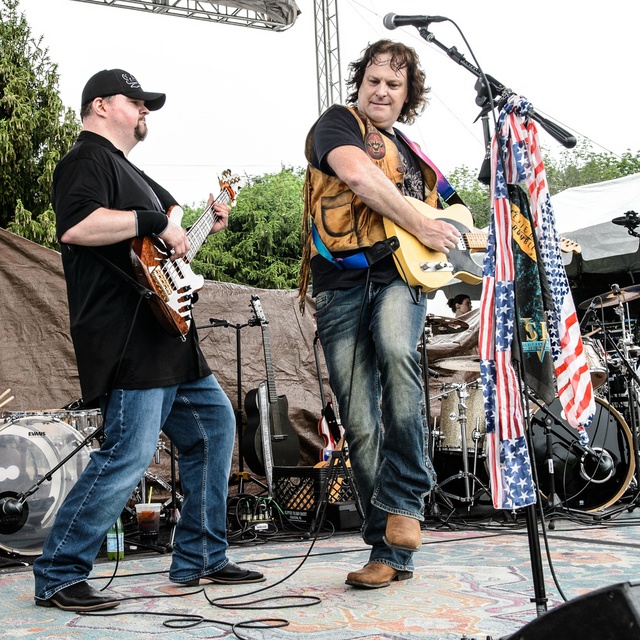 Looking for a Boogie Blues Rocking keyboard who can sing Harmony and jam.

The fact that I've been running this band for 20 years now is pretty remarkable. It's been an amazing ride. We recently shared the stage with national touring acts like Blackberry Smoke, 38 Special, George Thorogood, The Outlaws, Blackfoot, and more. It is impossible for me to express enough gratitude to all those involved in making our final product sound great. I owe a lot to Joe Blanton of The Bluefields, who filled in the edges to get my vocals as close to that of The Georgia Satellites as we could without totally ripping off Dan Baird! We had the pleasure of warming up for Dan, my musical superhero, a few times before he retired. I would like to thank my friend, guitar royalty Scott Sharrard, from the legendary Gregg Allman Band and Little Feat. I was thrilled to borrow some of his superb slide guitar playing for some tunes. Additionally, Scott helped with the overall production and lyrics, as well as getting the feel right on many parts of the songs. Kudos to Eric Finland (Friends Of The Brothers & Jaimoe's Jasssz Band) on the organ and piano. A special thanks to Grammy award-winning producer and magician, David Kowalski, who crafted the overall vibe of this album. Thank you to Lisa Peirnot for the photos and general cheerleading. I am grateful for the support of all my friends, family, and fans.

….Matt Coffy is a great front man while Andy Fuchs was spot-on bringing on some raucous riffing. ….with their telecasters guitar slung low and the amps turned up to 11, Their originals cooked... especially the rocking, “Freedom Song”, southern rock fans should check these guys out!

“The Matt Coffy Band embodies everything that an American bar band is supposed to be. Drunk on its own alcohol-fueled, blues-soaked rock, the Band delivers authentic blue-collar grit with no studio slickness or limp ballads to water down the dirt.”
- Whispering and Hollering Review
"Unlike many of the roots and Americana acts out there, the Matt Coffy Band knows that the real deal should rock like hell. ......scorches the walls with mean, bluesy riffs and raspy vocals; however, true to the group's classic-rock leanings, the tracks are melodic, wonderfully catchy. ... raw electric blues; you can imagine the smoke coming out of the amps. The Matt Coffy Band...a potent live creature"
- Ink 19 Magazine
"The Matt Coffy Band has energy to burn, and this record is relentless in its quick pacing. ... the Band just keep moving, and we're partying along with them. The ’80s are often remembered here.... memories of many MTV-addicted forty-somethings is the blues rock that managed to creep onto the charts from largely forgotten bar bands like the Georgia Satellites and the Fabulous Thunderbirds. The Matt Coffy Band, with its rootsy, good-time party rock, could be viewed as spiritual kin ....."
- AboveGround UnderGround Music

NOTE- WE PLAY TO THE CROWD, EXAMPLE COVER SET LISTS BELOW

NOTE- SOME FESTIVALS CAN BE ALL ORIGINALS

Matt Coffy (guitar, vocals), Andy Fuchs, Ben Stein, Sean Ronan -( Lead guitar, based on the gig) Charlie Doell-(Bass) and Ramsey Norman This is the opportunity for someone who wants to step into a situation that is already established and wants to play out 10-20 times a year. However, its more about the hang with friends to Jam and making our own music. We all have lives and families, jobs. Good guys who like to have a good time, decent musicianship, a real blast to jam with..

I have Full soundproofed studio to practice, including drums, with everything.