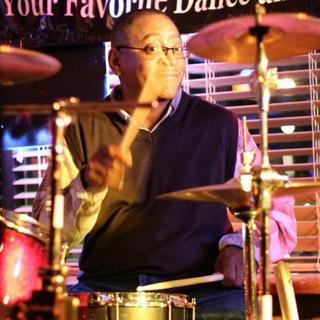 Coming home from school as a little kid around 1966-67 was the high light of my childhood. Why?…because either James brown or Sly and the family stone or The Jackson Five or Blood sweat and tears, somebody or some group I fantasize being in were going to be on T.V. that night. After the show I would go straight to my room and place different size books on the bed. (my drum set) with a hanger in each hand just banging away! Coming from a father that was in the army band at the time , well you can see where my whole family got this music thing from. About the time I was ten, my mother married my step dad which saw the raw talents in us. He took notice of my banging on books and my brothers picking up brooms acting like they were playing guitars. He turned us on to James brown in 1967. He would bring home the records and write down the lyrics and sing and dance around the house. We got hooked on James. My very first instrument was a guitar (1966) I got from my mother. I remember having a white pick with it. My brother Ira would ask me to play it all the time and I wouldn’t let him. (smiling) I finally just gave it to him because I really wasn’t interested in the guitar. My step father in 1973 brought me my first set of drums (blue sparkle) in Anchorage AK. I was so fascinated with the cymbals. I played the hell out of those cymbals. My brother would say while he was playing his guitar that he got before I got my drums, Melvin? Are you just going to play the cymbals? He made me feel so bad until I started playing the whole set. From their we started learning everything by ear until we took up music in school. We spent hours and hours down in that basement. We moved from Alaska to Columbus Ga. These were my music growth years 1974 in school concert , marching, and jazz band until 1980 when I graduated. Talent shows and Prince (1978) started studying him, was the order of the day. I have played with some many good musicians. Was in a group with Dallas Austin in Columbus Ga. Open up for a lot of famous people. Teddy Pendergrass, BB King in Jackson Ms., Bill summers and Summers heat, Betty Wright And so on. What makes me give it all when I perform? My years in Georgia I got to meet a drummer by the name of “Narada Michael Walden” this man plays from his heart and soul. I had already studied him and formed my style at that time after him. I told him that some said I played hard. He told me to keeping on playing that way because you are your own destiny. Play what you feel. The he signed the drum head I brought. When I saw him play that night, he was strapped down to his drum thrown.(smiling) Melvin