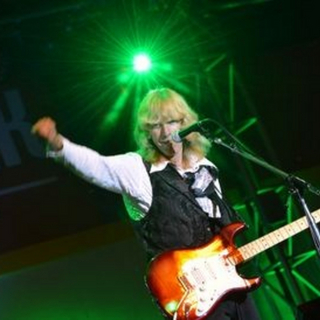 Michael Furlong's is a professional career performing and recording musician with an extensive resume of accomplishments. Michael is a lead vocalist, lead guitar player, international
recording artist and songwriter. His show is based out of Reno, NV where he has performed in virtually every major casino in the greater Reno-Tahoe, NV area.

During his performing career he has appeared coast to coast in the US and Canada, from Vancouver, BC to Halifax Nova Scotia, Seattle, WA, to Boston, MA, San Diego, CA to Orlando, FL, Hawaii, Guam, Japan and countless venues inbetween.

He is known as the first Tom Petty Tribute with the longest standing show going into his 29th year beginning 2019. Disneyworld Florida booked his show calling it “the best Tom Petty Tribute out there.”
His show was billed as Petty Theft for 23 years until he discovered that there were, over a period of time, four other bands in the country assuming that name. Six years ago he changed the name of the show to be Michael Furlong’s Tribute to Tom Petty to avoid confusion of his brand.

His “ Tribute to Tom Petty ” has been appearing in various other venues including state and county fairs, festivals concerts, and Indian Casinos since 1990. It was after seeing a poster advertsement of Michael’s show in Aspen, Co sent to him by a friend that Tom was made aware of the show. Tom Petty himself made mention of Michael’s show in a 1996 Rolling Stone Magazine interview calling it”the first known Petty imitator”. Tom again mentioned Michael’s show on the internationally syndicated radio show "Rock Line" and on "MTV's Top 20 Countdown".

His Tribute to Tom Petty performed in 2008 at Disneyworld Florida’s Epcot Center with Tom Petty’s written permission and blessings.

In additon his Tribute to Tom Petty, Michael has performed with other successful shows including, “Sugarloaf”, of Green Eyed Lady Fame, “Rob Hanna’s Salute To Rod Stewart”, “Brad Ford’s Fortunate Son” a tribute to Creedence Clearwater Revival, and “Raised On Radio The Tributes”, a revue style show

Michael is a native of Carson City, Nevada. From 1980 – 1987, his music career brought him to Hawaii and then Sacramento where he was managed by The Bruce Cohn Mgt. Company, also the Doobie Brothers and Night Ranger management, while signed to a recording deal with Atlantic Records. During that time, he released four records : Use It Or Lose It/Atlantic Records in the United States, 1984/85, Head On Rock 'N’ Roll /Roadrunner Records in England, Europe & Japan,1984. Breakaway/Music For Nations in England & Europe, 1987/88, and Reign Of Terror/Enigma internationally,1988, all of which had single releases.

As a recording artist he and his band have performed on Dick Clark's "American Bandstand", Showtime , VH-1 and various other music video shows internationally. The video for his title track single off of the Atlantic release, "Use It Or Lose It", appeared on regular rotation on MTV. "Use It Or Lose It" charted in Billboard Magazine, with 200 radio stations playing the title track coast to coast. His “Head On Rock 'N’ Roll “ release was the #2 import record to England. Two singles were released in England off of the "Breakaway" record and he has appeared in Cream, Hit Parader, Rolling Stone, and Kerrang/England publications. His shows have been sponsored by Delta Airlines, Miller Beer, Schlitz, Budweiser, Heineken, Becks, Computerland and Hong Kong Bank.