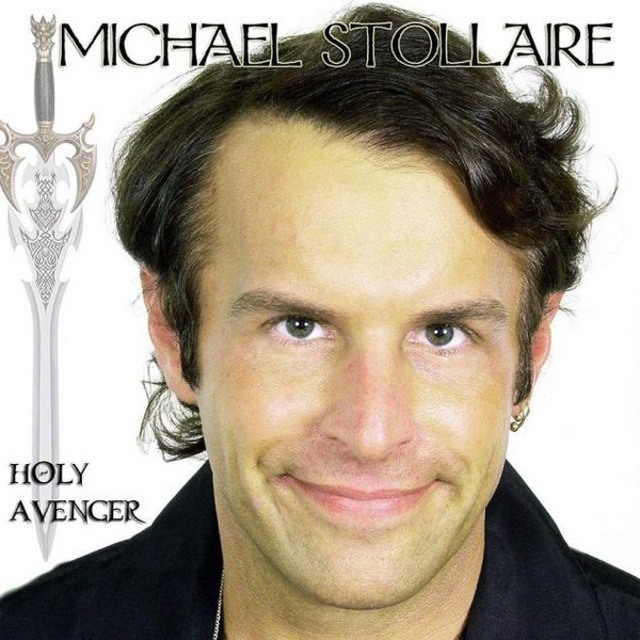 JetSpeed Records, the leading independent source for high quality music audio and audio/visual music programming, is proud to announce the release of the debut full-length album of Michael Stollaire via JetSpeed Records.

Recorded in Winter 2007, "HOLY AVENGER" captures the essence of the free-form poetry that Michael Stollaire is famous for, and its transformation into lyrical music that penetrates the listener's heart and soul. Recorded in DTS and Dolby 5.1 Surround Sound, "HOLY AVENGER" features a genre-spanning set list that includes the first single "Little Princess," the powerful ballad "I Can't Let You Go," the undeniable force of "Watch Her Walk," the pounding resonance of "Just Like Yesterday," the experimental hard-core rock of "Quest 4 Power," the face-melting guitar instrumental, "MGO," and others.

"Trinity" and "Holy Avenger" are available via iTunes and CDBABY here:

Bonus tracks on the CD/DVD will include exclusive interviews with Michael Stollaire, along with live performances and promotional video footage, making this a must-have release for both fans and music enthusiasts alike. Stollaire's "TRINTY" EP was released by JetSpeed earlier in November 2007.

"Trinity" and "Holy Avenger" are available via CDBABY here:


Michael has been singing lead vocals, and playing lead guitar/keyboards in rock bands since the tender age of twelve, playing music ranging from 1950s rock and roll to full-bore thrash metal, and everything in-between. He picked up playing the guitar when he was fourteen and has been amazing audiences with his talents ever since. He began writing and recording in the mid-1990s, and has been a non-stop blur until the current day! His songs and style are inspired by artists like Nickelback, Creed, Good Charlotte, Green Day, Evanescence, Maroon 5, Nightwish, Van Halen, Asia, Boston, Def Leppard, Dream Theatre, Edenbridge, ELP, Judas Priest, King Crimson, Led Zeppelin, Rush, Yes, and ZZ Top.

Michael was fatally infected with FM radio that was playing constantly throughout his childhood, in the house and in the car, along with a scattering of Beach Boys 45s that he inherited from his Mother. He began playing guitar and writing songs around 14 years of age. Magazines, posters, CDs, cassettes and records were constantly scattered throughout his room, and a dream is born. Picture him sitting alone in a room playing and singing into a cassette recorder. Then, he was involved in a seemingly endless string of bands, where he cut his teeth and his unique style was germinated. Then, he moved to California in the mid-90s, following his heart and career. Over the next 15 years or so, he played and recorded with a chain of club rock bands, as well as many solo performances and recordings. Currently writing a book of poetry, based on existentialism and romantic meanderings, with a working title of “Better Late than Never.”

"Trinity" will be pre-released at the first stadium concert of the 2007 "Holy Avenger" tour on August 25th , 2007 at the "Summerfaire '07 World Peace Concert" at The Orange Show Stadium in San Bernardino, California, along with a half dozen Midwest dates in mid August! “Trinity’s” official release will be in November 2007. The full-length CD, "Holy Avenger" will see its official release on Valentine’s Day 2008, where it will be available at iTunes, eMusic, CD Baby and select retail stores around the world, along with every date and venue associated with the world tour to support this ground-breaking release!

THE WORLD FAMOUS WHISKY A GO-GO

Use this to pay:

YOU GET A FREE DOWNLOAD OF MY ALBUM WITH EVERY PURCHASE!