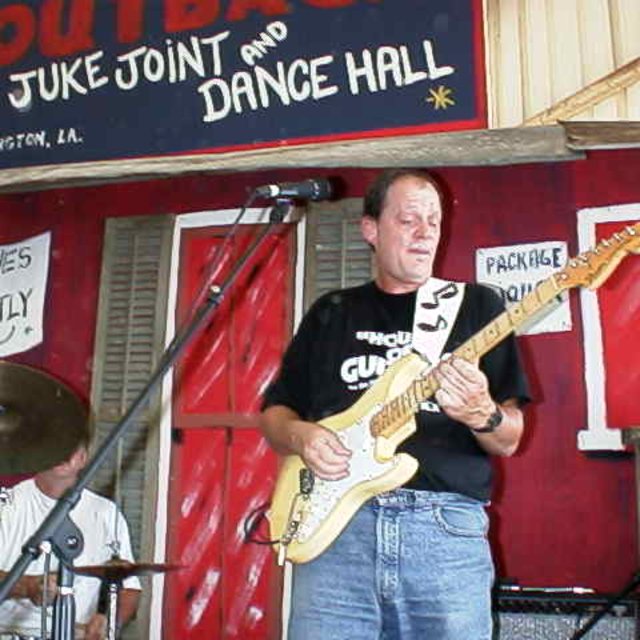 The Mo'Jelly Blues Band has been playing in and around the New Orleans area since the early '90's, in what started out as an open jam on Sundays at a local neighborhood bar. In that time it became apparant that the few consistant jammers that showed up each Sunday were ready to take the jam "on the road". It was then that the unnamed band got an engagement at a Northshore club and when someone asked about the name of the band, the name Mo'Jelly was birthed because of the jamming/improv direction the band had taken and still maintains today. While Mo'Jelly does standard blues/traditional blues/pop tunes as well as originals, it takes its own direction concentrating on the grooves and interplay, putting their own flavor to them. In 1999, The Mo'Jelly Blues Band did a self-produced CD titled "From the Hip", the name taken from the approach the band has playing live shows. The CD is still available on request thru this web site. The band still has 2 original members involved and this current aggregation have been together for approx 8 yrs and still has the same approach as the original band had nearly 15 yrs ago, and that is we like to jam. We have played everywhere from festivals to bars to private parties and have no plans to slow down anytime soon keeping the blues music alive and well. No live Mo'Jelly gig is the same, so yall come get you some Jelly.

Influences of the players in the band are relatively mutual and that includes, but not limited to, the original Masters of the Blues, Robert Johnson, Muddy Waters, Howlin' Wolf, Albert King, B.B. King, Freddie King, T-Bone Walker, Buddy Guy, Professor Longhair, Albert Collins, Luther Allison; more modern players such as Stevie Ray Vaughn, Peter Green, Ronnie Earl, Stevie Wonder, Robert Cray, Jerry Garcia and the Grateful Dead and the New Orleans sound in general. Other influences include the rich musical heritage from New Orleans that members in the band have been involved with by playing gigs and/or jammed with thru the years, including members of The Meters; The Radiators; Rock and Roll Hall of Famer Allen Toussaint; the late greats of Ernie K-Doe, Gatemouth Brown, Johnny Adams and Erving Charles (of the Fats Domino Band); saxman James Rivers; drummer/percussionist Steve Amadee and keyboardist Johnny Magnie of the subdudes; saxman Kenny "Snakebite" Jacobs; drummer Kenny Blevins of Sonny Landreth and sometimes John Hiatt's band, The Goners; and local/national jazz recording artist, drummer Johnny Vidocovich. With all these influences, Mo'Jelly combines the blues with the funk, soul, groove and intuition between players, which from gig to gig, the tunes will never be duplicated due to the jams and improvsational approach which only the live performances will attest, which we like to call "Spreading the Jam".