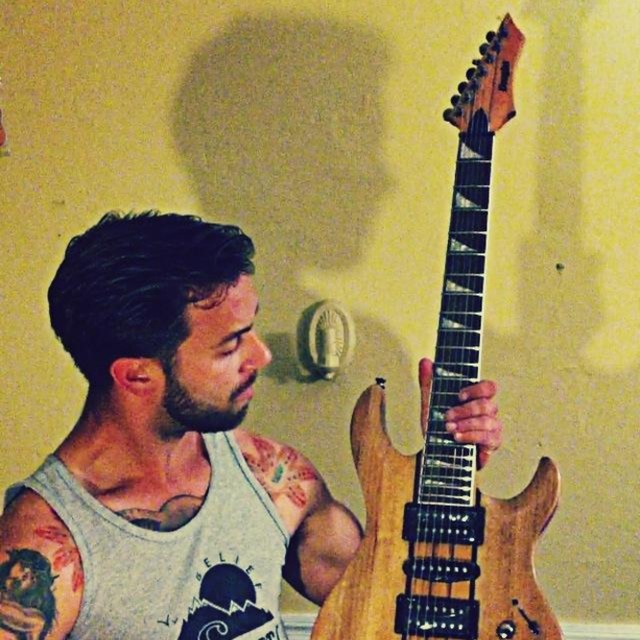 I’ve been playing guitar since 1999. Started out acoustic as everyone does then moved to electric. Ranging from everything like foulk to deathmetal and anything in between. I have a very eclectic palette.

The variety of music I listen to is endless. I grew up on Sade and jazz, that stemmed from my mother.
In my early teens I listened to the normal rock,hip hop,pop and punk that was out. It wasn’t until I was introduced to Stained,Korn and Limp Bizkit that I got into heavier music. I found Sevendust through those bands and they are still to this day one of my top favorite bands.
From there I was introduced to Acacia Strain,Misery Signals and August Burns Red. Some of the most influential bands in the newer metal age. I quickly became obsessed with metal and soon searched out every and any band that would satisfy my appetite for heavy music.
Found an album called “Blood lust” by Through the eyes of the dead and was instantly changed for ever. That album made me want to play deathcore or anything like it. Along with finding the band The Black Dalehia Murder and falling in love with deathmetal. After listening to those bands it was always an adventure finding new ones. I started listening to more progressive metal and ran into a band called Vail Of Maya and was instantly hooked forever. That pushed me towards other bands in the sub-genre like Born of Osiris, Within the ruins and After the Bariel.
I then found the newer genres called Djent and was hooked on that from bands like Periphery, Tesseract, Animals as Leaders and Monuments.
Got into newer bands like Novelists, Northlane, Heart of a Coward,The Contortionist, Erra, Fit for an Autopsy, Invent Animate, Oceano, Volumes etc
Other bands to note on the way are Whitechapel and Thy Art is Murder two bands that are juggernauts and massive influence for me personally.
On the non-metal side I listen to a wide verity of folk,jazz,rap,hip-hop and r&b my influence’s are rather endless in the realm of music and I can relate to every genre in some way.