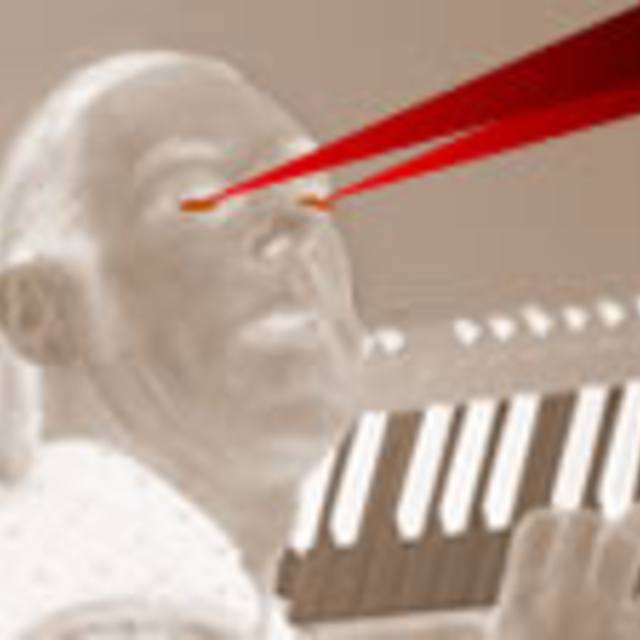 Johnny Blue tickles the ivories. He shreds the 88’s. Hell, he’d light ‘em on fire if Jerry Lee Lewis hadn’t done it already. And he loves brandishing his Hammond organ and Leslie to entertain music aficionado’s everywhere he is graced with a stage. His career spans over 40 years and he’s still going strong!

Johnny’s parents bought an upright piano that had been fitted out as a player piano and about thirty or forty piano rolls when he was in fourth grade in Houston Texas, He was fascinated watching those black and whites move seemingly of their own accord, got smitten by the sound emanating from within that wonderful instrument and he never looked back. After first moving back to California to start his freshman year (an education in and of its own, coming from four years of late 1960's Texas!), then graduating high school in 1975 with a pedigree of general education plus music classes spanning seven years, marching band, concert band, symphonic band, jazz band and a host of choirs, along with the "jam" bands he'd formed with his friends, he knew that music was to be his life. In fact, the very morning after graduation night he boarded a Greyhound bus with his trusty Fender Rhodes, at seventeen years old, to head from Lenox, Massachusetts where he'd moved (from Danville, CA, just east of San Francisco) with his parents and spent the last six months of High School in those freezing winters, to re-cross the country back to California to follow his heart and start his lifelong musical journey!

His first band of note was “Raisin’ Caine”, one of the southlands premier A-list club and original bands of the late 70’s. He next forayed into the punk rock scene playing keys for “The Squares”, a band that garnered KROQ airtime. Following up his success he helped found two more A-list southland club bands, “Straight Up” and “Twist of Fate”. Playing with these groups among other musical projects through the 80’s and early 90’s, he peppered his local work with road work and racked up tens of thousands of miles paying his dues throughout America and Canada.

Constantly seeking to expand his knowledge and repertoire, Johnny also forayed into show band music. Performing for six years with the nationally known “Bobby Freeman Show”, he had the honor to play for a number of state governors, two NAMM show appearances, and the Miss USA pageant twice.

Ending up in Memphis he decided to get back to his roots, the Blues. Having met Paul Wood, who had cut three albums with John Lee Hooker and is the sole surviving member of John Lee Hooker’s “Coast to Coast Blues Band”, they decided to form a Memphis based Blues band of their own. Recruiting Memphis Blues drummer Daren Dortin, host of the acclaimed Blues radio show “Beale Street Caravan”, and bassist Richard Hite of “Canned Heat” fame, they formed “De Delta Dawgs”, playing Blues music up and down the Mississippi delta, nearly every venue on world famous Beale Street, and a number of Blues festivals based in Memphis.

After his stint with De Delta Dogs, he next ventured into one of his other musical loves, Reggae. Johnny spent the next fourteen years absorbing all things roots rock reggae. With first the regional group “Black & White” and then the international group “Rascalin & the Roots Rockers” Johnny toured extensively, culminating with headlining two years of the “Annual Bob Marley Festival Tour”. With Johnny’s input on keyboards, harmony vocals and musical arrangement, the Roots Rockers CD “Reggae Fever” was voted as 2000’s “Reggae CD of the Year” beating out such notables as “Burning Spear” and “Jimmy Cliff.”

Soon thereafter Johnny was back into the Blues again forming the house band for his weekly open mic Sunday Blues jam with his on and off partner Blues guitarist/vocalist “G.R. Hall”. As keyboardist/vocalist for “The Boxcar Blues Band” Johnny played with many of southern California’s notable bluesmen.

Johnny was then invited to join Guitar Center’s Best Blues Guitarist winner Robbie King, the southland’s notable and talented singer/songwriter Tina Jackson, and along with Gary “Mr. Pocket” Cox on bass, Jerry Olsen and then Dan Erfurt on drums, and the ever tasteful Gip Lentine on harp he burned up stages with “Robbie King and the Blues Counts Featuring Miss Tina Jackson”!

Johnny was then sidetracked for six years having fought and beaten “The Big C”, but that didn’t stop him.

He just finished nearly two years co-hosting one of the longest running Pro Blues Jams (19+ years) in southern California with “Harry and the Hitmen”, featuring Harry Rattleman on bass and vocals, Johnny’s longtime musical compatriot (since 1978!!!) G.R. Hall on guitar and vocals, Steve Ballesteros on guitar and vocals, substitute bassists/vocalists Leo A. Valenzuela and Michael Antonowitsch (Harry was almost taken from us permanently by a careless driver who T-boned Harry on his Harley!), drummers Scott Galloway (who also sings, and is currently on medical leave) and Bill “Wildman” Crandall. Every Sunday from 4-8pm at Chaser’s Lounge in Orange the Hitmen opened their hearts and the stage to some of the southland’s finest Blues musicians as well as to an appreciative audience.

Johnny occasionally farms out his talents to other musical projects, writes and records his own musical stylings in his home studio, and enjoys the love of his family and pets. He believes that music is THE universal language and makes every opportunity to demonstrate its power! Play On…..

Johnny is a free agent right now and he is actively seeking work, preferably, to join an already working band that’s lost its keyboardist or wants to add one to their lineup. Johnny is willing to travel if remuneration and the other necessities are worthwhile. He will be a dedicated team player who always presents a professional and positive attitude, and he is always respectful.

A tough question as there are so many over the decades but I cut my teeth playing AM radio pop, rock, and Motown, all three being genres of music based on the Blues. I especially learned from those studio cats that knew how to play keyboard parts that either *were* the groove or fit in perfectly as counterpoint to the groove.

My influences in no particular order:

The session musician keyboardists listed below are responsible for providing the keyboard parts and tones that are on countless top ten hits from the 1950's through the 1970's and into the 1980's. They were BIG influences on me though I didn't know it at the time. Most of the hits they played on, produced, and wrote parts for "happened" spur of the moment, in their own ear(s) and in cohort with their fellow ghost players. It is estimated that Wrecking Crew drummer and pocket player Hal Blaine played on 35,000 tracks! Quite a few of those were number one hits and many more were top 40 hits.

Stax Records Keyboardist (not all are listed):
Booker T Jones

Muscle Shoals Keyboardists (not all are listed):
David Briggs (also of "The Nashville Cats"), Barry Beckett

Also, the keyboardists for the Memphis A-list session players.

Likely I've forgotten some but you might hear their influence in my playing.

ALL Stage Rig items including their accessories (except the Leslie System 21 & the Atlas mic stand) are protected in wheeled locking ATA hardshell cases, or their made-to-fit soft cases, for quick & easy transit and ingress/exit to/from venues.

My "maximum" stage rig fits nicely in my well-maintained 5.3L V8 GMC Yukon SLT. My "minimum" stage rig will fit any vehicle, though I prefer my Yukon. I bring in nine "pieces" making three trips if it's a short distance or two if it's longer, for the max rig, and one for the mini rig which is two pieces.

The above combined equipment is a very versatile and flexible rig. It can be minimized to just the Korg Kronos, an X stand, and a single 1/4" audio cable (given that there is a PA with an open channel, and if not I can add one QSC K12.2). It can act as the PA system for the whole band at small-midsize clubs (vocalists would need their own mics, mic stands, and mic cables) including micing the kick and snare if the drummer does not have his/her own sub mixer & mics. I can run with the Ventilator and 1 or 2 K12.2's in place of the System 21 when space is at a premium (but having that real Leslie on stage is SO much more .... Groovy!). There are many other variations as well. I doubt I've even thought of them all.

My favorite, however, is to play all 3 keyboards on the 3 tier stand thru their pedals all running through the Leslie System 21 (350 watts combined). How this is possible is that the System 21 has both a "Leslie" channel (spinning rotor) and a "stationary" channel (clean unaffected sound). With that 350 watts on stage it will compete easily with (sometimes overly) loud guitar amps in a small to mid-size club, and combined with a line out to a channel in the PA/monitors it will sound great in any venue.

All non Hammond sounds route thru the stationary channel, thereby providing clean sound (pianos, synths, horns, strings, clavs and EP's, etc.) via the 2121's 150W 15" speaker and its 50W horn, while the Sk1's spot on recreation of the Hammond B3 (or a plethora of other classic organ emulations!) are channeled into the 2101 Mk2's horn rotor (50 watts) and spot on digital recreation of the spinning low rotor (fed to the 2121 for full emulation of various legacy Leslie models like the 122 and the 147, w/choice of cabinet emulations made with the pre-programming and subsequent selection of, on the fly, from the Sk1, or, as pre-programmed, from the MIDI mastered Korg Kronos pedal switch).

Along with the Leslie 2101 Mk2's spinning horn rotor it also sports 2 6" woofers (75W) and 2 tweeters (75W), for a total of 200 watts in the 2101. The System 21 is a full range system which is ideal for keyboards, and with its tube driven preamp this powerhouse can be as gritty as Jon Lords setup.

Currently my single longest setup task is the running and plugging in of cables, so, I should mention that I am in the process of custom-building a snake that will fit any combination of my setups so that I only have to string a single (bundled) cable and plug in each end.

Versatility in physical setup aside, I have to say that this rig can't be beat for versatility in range of instruments it can produce. The Kronos, with its sampling is capable of emulating any sound. If it hasn't already been sampled for simply loading into the Kronos, it can be created with the Kronos' powerful and sophisticated nine individual synth engines. I simply can't say enough about this instruments' sophistication and capabilities.

Add Hammond offering accurate representations of a wide range of its own and other manufacturers models in the Sk-1 (basically a B3 in a 15Lb box!) and throw in the Leslie emulations and other sound shaping features found in the 2101 and there isn't an organist's "signature" sound that can't be recreated.

Combining and utilizing the capabilities of all my equipment I am constantly being inspired to acheive musical heights and perspectives like never before. And I would love to share them with you!