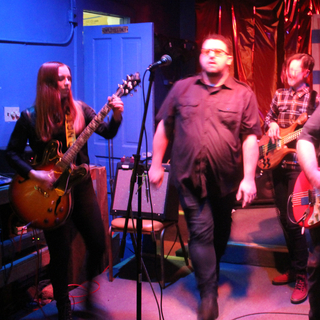 Murder City Saints is a folk-grunge band from the South Side of Chicago making its debut in 2018 with powerful lyric-driven tunes about love, hate and pain.

Murder City Saints are purveyors of #Frunge — A hard-edge storytelling sound influenced by folk icons Bob Dylan, Joe Cocker and John Prine and inspired by the Nirvana, Smashing Pumpkins side of the '90s, and a mashup of Chicago blues, classic rock and modern alternative folk rockers including Deer Tick, Dawes, T. Hardy Morris and the Hardknocks and Matthew Logan Vasquez (formerly of Delta Spirit).

Konkol's unique vocal style is raw and packed with unfiltered emotion. He takes poetic license in his songs to tell of real human experiences — heartbreak, longing and political resistance — from diverse perspectives.

Bassist Dina Simone is a badass with soul. She has provided the low end for many bands in Chicago including ManCub and Dance Bullies and creates genre-less music in her solo project.

Drummer Peter Mack puts the smack down with a laid back vibe. A prolific musician who came up in the Chicago's ska/garage and rock scene of the 90's, Peter iss gigging with bands on major stages all over Chicago, most notably as the band leader for the Chicago Jamaican Jazz Ensemble.

Lead guitar player Radka Kasparcova, a Pennsylvania native who Blues-E-News Magazine's named one of the "Top 25 Women In Blues Worldwide," takes the Murder City Saints sound to the next level. Already a regular contributor in the Chicago Blues scene, Radka has had the honor of playing along side Buddy Guy, Joanna Connor, Mississippi Heat, Smiley Tillmon, Tom Holland, Marty Sammon, Mike Wheeler, Linsey Alexander, and many more.