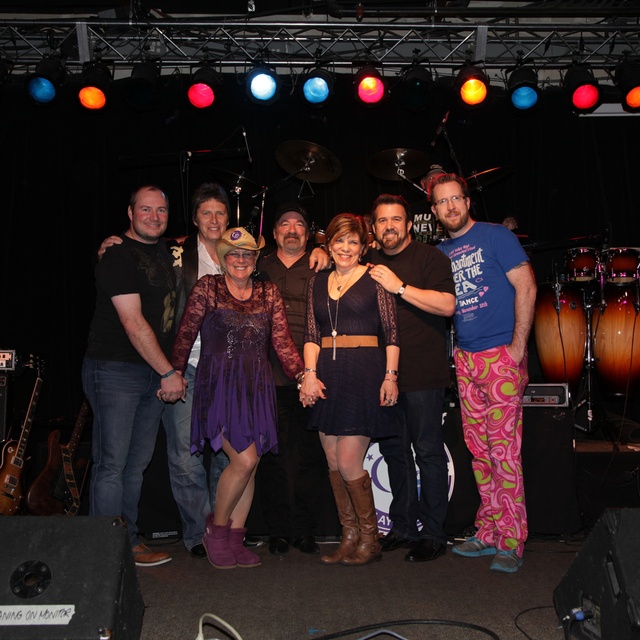 What makes Old School unique is that unlike many other bands, we not only play the greatest hits of the 1960's live, we live it! Dressed in great 60's retro fashions, and moving to the groove of some of the greatest music ever recorded, we channel the 60's vibe into every show! Oh, there are many tribute bands around that specialize in recreating the songs and sounds of one artist or band, but Old School Rock-N-Roll specializes in recreating the sounds of an entire decade. Our show is truly a six to sixty experience because these songs have never stopped playing on the radio, or being used in films, television shows and have been re-recorded time and time again. Old School Rock-N-Roll performs many songs that you've never heard live before, but you've heard them a thousand times while cruising in your ride to the beach or boardwalk.

Come and experience a show where you'll be dancing song after song, a show that will bring back the "good-old-days" time and time again. We are having a blast playing these songs, as they all have great memories attached to each one. Our show will make you want to sing and tap your foot....

HITS WE PLAY LIVE!!!
Kicks-Paul Revere
Born to Be Wild-Steppanwolf
These Boots-Nancy Sinatra
Surfin USA- Beach Boys
I Want To Hold Your Hand-
Beatles
Incense and Peppermints-Strawberry Alarm Clock
This Diamond Ring-Gary Lewis and the Playboys
Heartful of Soul-The Yardbirds
Happy Together-The Turtles
Back in the USSR- Beatles
Secret Agent Man-Johnny Rivers
Pretty Woman-Roy Oribison
Venus-Shocking Blue
Good Lovin-The Rascals
Don't Sleep in the Subway-Petula Clark
We Gotta Get Out of This Place - Animals
The Letter-The Box Tops
Come on Down to My Boat-Every Mothers Son
Wait a Million Years-Grass Roots
Make Your Own Kind of Music-Mama Cass
Pleasant Valley Sunday-The Monkees
Summer in the City-Lovin Spoonful
Green Tamborine-Lemon Pipers
Gimme Gimme Some Lovin-Spencer Davis
No Time-The Guess Who
I Wonder What She's Doing Tonight-Boyce&Hart
Good Lovin-The Rascals
I'm a Beliver-Monkees
Downtown-Petula Clark
Locomotion - Little Eva
Somebody to Love - Jefferson Airplane
White Rabbit - Jefferson Airplane
Me and Bobby McGee - Jani Joplin
These Eyes - The Guess Who
Whole Lotta Love - Led Zeppelin
Love her Madly - The Doors
Many, Many more & will learn on requests.

Lee comes to the band with a wealth of professional experience. Lee has been playing drums since he was 12 years old and has been fortunate to be in bands that have opened for a number of touring national acts including The Doobie Brothers, Montrose, Jefferson Starship, Huey Lewis and the News, and Blue Oyster Cult. Lee also was a member of the Pat Travers Band, a very successful '70's rocker, playing drums for him on his west coast tours. Lee has always loved the music of the '60's and based on that love Ed and Lee created Old School Rock-N-Roll!

Debbie inherited her voice from her mom, who sang on radio programs in the 1950s. She has the best meter in the band, and if Lee is off by the slightest of margins, Deb knows it. She also has a natural ear for harmonies and she helps to work out the harmony parts with Lee. Debbie also handles the majority of percussion instruments which abound in the hits of the 60's.

Ed started playing guitar at the ripe old age of 8. Lee and Ed grew up together and started their first band when Ed was only 12 years old. Ed covers Rhythm & Lead Guitar, along with singing both lead and background vocals on many of the bands songs. Now after all these years they are back together again, playing the music they really enjoy.

Tracy comes to Old School from a family of musicians. Her father, Jim, went to college on a vocal scholarship and is an excellent singer. This talent was obviously passed on to his daughter. Lee convinced her to join Old School and now she's ripping lead vocals on such hits as, Venus and These Boots are Made for Walking. The one thing you can say about Tracy, aka Red, is that she has a blast on stage!

Vince's main instrument is the Piano, however he also plays a mean Bass Guitar. He and his father, Lee lay down the backbeat to all of these sixties songs with precision and timing. Vince has been playing for the last four years and also picks up some of the Lead Vocals, as well as background
vocals.

Travis is a classically trained Pianist. He was taking lessons at the early age of 7 years old. He came to Old School about 1 year ago and he is now covering the multitude of keys, strings, and horns that you will find in the Old School sets. Travis also picks up some of the lead vocals as well as many background vocals.

Mark started guitar at the age of 16 years old. He has a long list of credentials, not the least of which is touring with the likes of Pat Travers, Joe Lynn Turner, Glen Hughes, and opened for the likes of Taylor Swift, Rascal Flats, Luke Bryant, Creed, Carlos Santana, and too many more to list. Mark's strong vocal covers the full range of leads and backgrounds. He also handles most of the Lead parts and covers the Rythym parts when Ed's on lead.

We play with all "Top of the line" Gear. Drums: 1981 9ply Mahogany Yamaha Recording Series Drums in natural finish with DW snare and Zildjian K Cymbals. Full Gibraltar rack system with DW9000 pedals. All LP percussion gear. Keyboard: Roland TD7 with 2 expansion cards to duplicate all the keyboards of the 1960's. Guitars, too many to list, however Dr. Z & Fender Amps. Bass: Lakland & Ibenez guitars with TC Helecon amplification. PA system: Yamaha LS9 32 channel board, JBL mains, woofer, power amps, monitors with all Sure SM58 blue line vocal mics. We have a 1958 Chevorlet Stepside Pickup (see below) with matching trailer to transport our gear anywhere in style!
When Old School pulls up to play a venue...Everyone knows we're here!

This will be Old School's 5th year with Sacred Heart Festival. Great Food, Great Rides, and of course, Great Music. We hope to see all of our fans out there, as we all need a little live music. It soothes the soul.

This is a fantastic family event with rides, attractions, and great food. Open to the public, and Sacred Heart knows how to carnival! Come dance with Old School and enjoy a fantastic night out!

Unfortunately this is closed to the public

Old School A Tribute to the 60’s will be performing for the 5th year in a row at the Hayes Mansion with the entire community. Come out and see the different booths, check out the police cars and fire trucks, and eat a great meal under the stars.