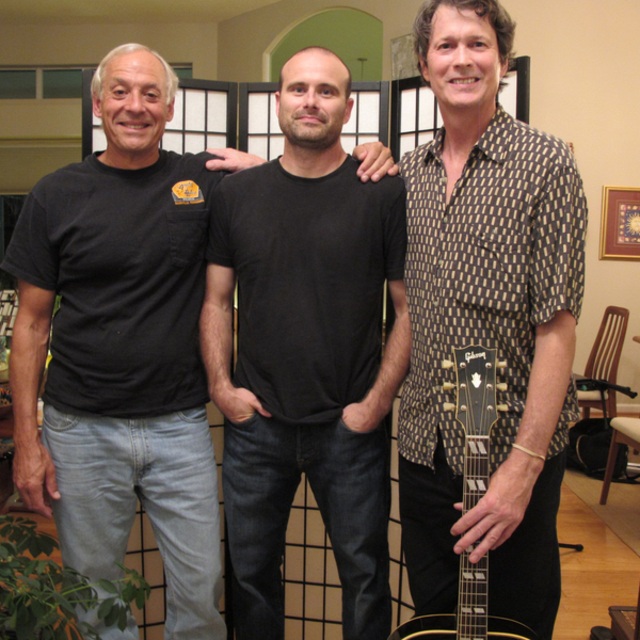 Quiet enough to talk over, propulsive enough to dance to, and covering material varied enough to please all ages Ã¢â‚¬â€œ Miles Davis to Wilco to the Grateful Dead to The Band to the Allman Bros to Jimi Hendrix-

OUIJA BROTHERS are available to play at private parties, restaurants, clubs, bars, weddings, benefits, palm-readings and seances. They recycle, and use their blinkers.

Inspired by tales of their distant cousin, the 9 fingered gypsy guitarist, Hasbro Ouija, and galvanized by a jam session where they conjured a blend of music that played itself, OUIJA BROTHERS pull 18 strings, and have 6 ears, 9 children, and 82 combined years of experience playing live music for human beings. They are 151 years old, altogether, and counting.

CHIP BENNETT(Vocals, Acoustic Guitar, Electric Bass, Harp) was only 12 years old when he heard the BeatlesÃ¢â‚¬â„¢ "I Feel Fine" Ã¢â‚¬â€œ he proceeded to play ukulele, a nylon-string Tempo brand guitar, live in his van, surf Hatteras and the Maldives, steep in Hendrix, Stones, Zeppelin, and Dylan, and get extremely familiar with a particular 1972 Martin D-18 guitar. Chip played lead guitar for local blues band, VuduBlu, starting in 2003, where he played beside

DAVID MURPHY (Vocals, Acoustic Guitar, Electric Bass) who survived an early exposure to the French horn, then found a Greco-brand classical guitar in the the attic, and later faked his way into the bass chair in the jazz band at SUNY-Cortland, by auditioningby ear while pretending to read a chart possibly written in Sanskrit. After his stint playing bass with VuduBlu led to musical combustion with Chip, David was then introduced to

SCOTT RUSSELL (Acoustic Guitar, Slide Guitar) who was mesmerized by Jerry Garcia, Roy Buchanan and Jaco Pastorius in the 70's, and has been sneaking up on Chickenskin Music ever since. A co-founder of Tyrone Thighbone and the Nocturnal Emissionsin the late Ã¢â‚¬Ëœ70's, Scott played lead guitar with two local bands, Trap Door (since 1991), and (more recently) Laughing Bones. Hi, Mom!