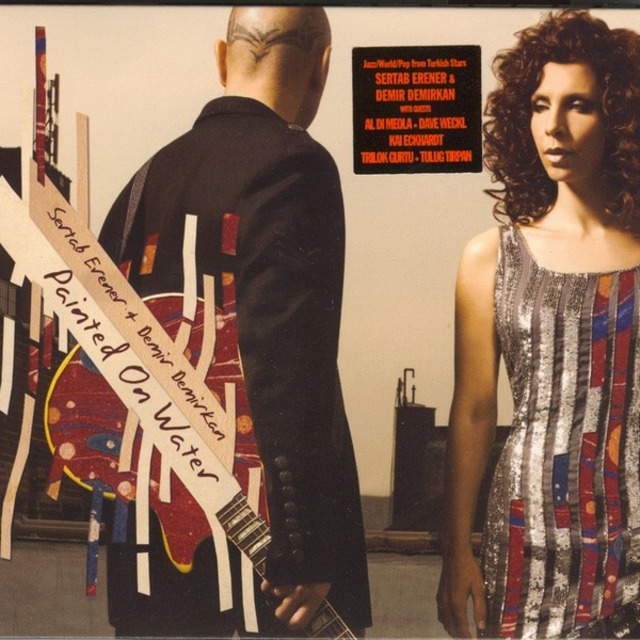 PAINTED ON WATER, the self-titled album project by the duo of vocalist Sertab Erener and composer/guitarist Demir Demirkan, is more than a breath of fresh air – it’s one of the year’s unexpected pleasures, a unique excursion through jazz, rock and the duo’s own Turkish musical and cultural heritage. The album is released on Motema Music June 9, 2009.

Album opener “Blue” was written by Demirkan for Grammy-winning guest guitarist Al DiMeola, while distinctly modern alternative-rock notes are sounded in the vividly emotional “Nothing But To Pray,” “Love We Made,” and “Before the Night.” The whimsical “One Shot” and “Mad Love” connect folk songs to blues and funk. A suite of instrumentals concludes the album, the swing-influenced “Shehnaz on Shiraz,” “Aegean Bride,” inspired by the reflections of a bride’s father, and the minimal, hypnotic “Habudiyar,” an experimental interpolation of folk material.

Naming their band and the album after the traditional Turkish marbled-paper art known as Ebru, created by floating dyes on the surface of water, PAINTED ON WATER demonstrates the shifting, tangible and intangible qualities of music, emotion and art. The duo’s upcoming American appearances promise to be rich and involving multi-media events, accompanied by a live projected display of Ebru art, created onstage by the master paper-marbling artist Hikmet Barutcugil. Imbued with its many historic sources, the ethos of the album is at once Turkish, and universal: “You and me is a long, long lost story, painted on water,” is a key lyric, notes Demirkan. The concept also expresses that “life is like water, and you put the colors onto it,” adds Erener.

“Making Anatolian melodies accessible with English lyrics, and having world-class eastern and western musicians -- these were the fundamentals of the album,” says Demirkan. “Because in Turkish music, all the instruments are playing the same melody, it has no harmony, no chord progressions. We wrote new melodies to harmonize the material, and completed the melodies in a western verse/chorus form. Phil Galdston interpreted the feel of the village dance songs into a contemporary lyric.”

The album’s all-encompassing concept has already been mightily refreshing to long-time followers, says Erener. “We’ve performed twice as Painted On Water for the Turkish audience. They felt this familiar melody, but couldn’t put their finger on the song right away, because of the English lyric.” There’s a feeling of renewal in this new collaboration of longtime partners, adds Demirkan. “Previously, I was Sertab’s songwriter and producer. We set our pop and rock background aside, and this is the first result – not Sertab, or Demir, but a new band.”

Erener and Demirkan are among Turkey’s most celebrated musicians. Erener’s 12 albums have sold in the millions in Turkey, and as far away as Japan. Guitarist, composer and PAINTED ON WATER album co-producer Demirkan became one of Turkey’s true rock stars in the Istanbul heavy metal band Pentagram. He has released three solo albums and two film scores. He and Erener co-wrote the 2003 international hit, “Every Way That I Can,” Turkey’s first and only winner in the history of the Eurovision Song Contest.

Demirkan sums up: “I believe that we all spoke the same language sometime in the past. Music still has that quality, in melody and rhythm. I think everyone shares that, and it’s the basis of PAINTED ON WATER.”

Screen name:
Painted_on_Water
Member since:
Sep 14 2009
Active over 1 month ago
Level of commitment:
Touring
Years together:
10
Gigs played:
Over 100
Tend to practice:
More than 3 times per week
Available to gig:
6-7 nights a week
Age:
39 years