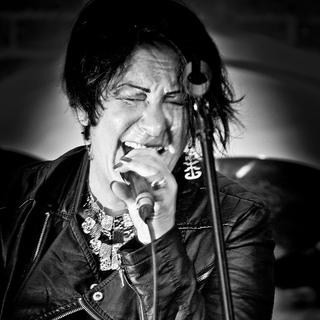 In 2016 I was recording at Seventh Level Records In Bogotaâ€™ Colombia, producing, event management as well as vocal coaching, commercials and performing live throughout South America, Caribbean, Europe and the USA.
Born in Connecticut, it all began at the age of three when I started taking dancing lessons following in my sisterâ€™s footsteps, which of course gave me the power of rhythm so while dancing along with live orchestras and after 17 years of developing my artistic abilities and graduating from Clark Dance Co. in NYC where else would my future go??? I began singing in choruses and dancing my way through high school when I entered the Rocketts in Radio City Music Hall in NYC but I wanted more than dancing. By the time I finished HS I realized that music was my calling. One day, a great friend of mine who played in the marching band during the dayâ€¦played a kick ass trumpet in a band at night, asked me if I wanted to sing chorus with Michael Boltin. Of course I said yes. That opened the door to my singing career. It was in 1969 I began singing chorus for Johnny and Edgar Winters as well as Matt Guitar Murphy, Spyro Gyra , J. Geils band, Manhattan Transfer, to mention a few, who would show up at the Shaboo Inn in Connecticut just to jam or in NYC clubs. I was amidst monster musicians. Once, while walking into a sound check with Michael Boltin, there was this skinny black guy sitting on the floor pickin his guitarâ€¦â€¦I asked one of the musicians who he was and he answered â€¦â€¦.Chuck Berry. I felt I needed to polish my skills so after high school went to Emerson Collage of Art in Massachusetts for two years and after many experiences with many stars and influences from the 70â€™s like Janis Joplin, Jimi Hendrix etc. I branched out on my own to sing along with the all-time Grand Ole Opry guitarist Burt Teague. From there with Julie Grant of Mocedades. While on tour with her in Aruba in 1986 I was seen by a salsa band called Los Trentons and was contracted to sing in Maracaibo Venezuela. Another stage of my singing career began. I went on tour in Venezuela and shared the stage with Los Guacos who opened for me at Club Ipsilon then continued to Caracas Venezuela where I hooked up with many super musicians who are now top musicians all over the world. I signed with Sono Rodven Record Co. for a few years but nothing materialized from it. I played alongside Willie Colon, played the Hard Rock Café and Harley Davidson Festival in Bogotaâ€™ Colombia 2015 and just too many people and places to mention. There is so much more to sing and create and so much to shareâ€¦â€¦.