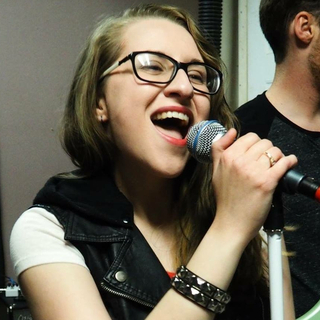 Hi, I'm Ally. I've been singing for as long as I can remember, and started doing musical theatre in about 4th grade. I was in my high school's female a capella group, and did voice lessons and summer rock music camp during high school, as well. In college, I was a Theatre major with Music and Psych minors, so I did a lot of performing, including an hour long solo singing show during an arts festival we had at my school (which I actually co-produced with two other people). I also did more musical theatre and chorus, and learned about music theory and history. All of this has contributed greatly to my musical passions and abilities. More than anything, though, I've just always wanted nothing more than to sing. I try to do open mics, karaoke, gigs, whatever I can to get out there and gain experience and do what I love. If I can make it as a musician, I can't explain what a dream come true that will be for me. Music is my everything. I really want to get out there and perform as much as possible so I can connect with what I love most: music.

For those who aren't premiere members, I'm gonna put my number here. The first time you contact me, please text me because I screen my calls. 203-751-7828

Also, here is my YT channel! Sorry for all the talking at the beginning of the Fringe videos, they were on my friend's phone and not mine, so I couldn't edit them. But the videos have some of my favorite performances in them, nonetheless. Those videos are about 4 years old by now, but I also have videos of some more recent gigs on there, and will be releasing an actual music video, soon!! :D

(Here's an additional link to a specific video, in case the other link doesn't work)

Also, here's my and Smule: Sing! profiles, for some additional vocal samples

I also do a little bit of composing and lyric writing. Mostly lyric writing, though. The composing was only when I was taking composition classes in college. Lyric writing, however, I've been doing since freshman year of high school and I really enjoy that. Would love to be able to contribute in that way to a band, as well.

I've also been very interested in the idea of taking songs from one genre and flipping them into another genre (as a cover with a twist), probably pop or hip-hop into alternative rock, like bands such as Fame on Fire, Halocene, and others do on be, or like how lots of famous rock bands have done on the Pop Goes Punk albums. If that's something you find cool, as well, definitely let me know!

There's gonna be a lot more artists, so bear with me. They all say a lot about my musical taste and intended style and I don't know which ones people will recognize, so I'm just gonna put it all out there and whatever you connect with is cool, don't feel pressured to pay attention to every single artist. I just really love music and want y'all to get a comprehensive look at the music I rock with.

(Neither of which I really know how to use, but maybe they'll be of use for someone else)