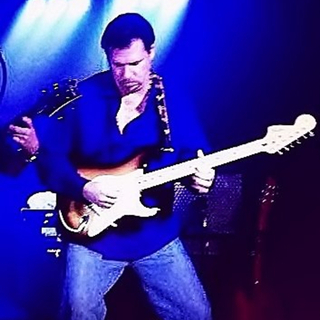 Paul Francis Dezelski was born Sept. 25, 1964 in Cedar Rapids, Iowa. As an only child, he started listening to music and playing drums at age 7, after seeing Buddy Rich on the Tonight show. He then moved to guitar after seeing Jimi Hendrix on television at Woodstock. With a varied musical upbringing, listening from everything from Benny Goodman (Paul's mother was a clarinetist) Jimi Hendrix, KISS, Roy Clark, pop radio music, and loved classical music soundtracks from 70's movie music. Mostly self-taught on guitar, he started taking guitar lessons, learning notation, theory, advanced scales, chord progressions, transposing, etc. He then moved to jazz-fusion music after hearing Jeff Beck/The Mahavishnu Orchestra/Frank Zappa/Weather Report, and Tommy Bolin on a local Iowa radio station. Paul started playing professionally at age 13, playing school functions, parties, and sneaking into local clubs underage to jam. "Everything was about music then, it still is, I'd fall asleep holding my guitar many nights, there wasn't anything in life more important" Paul started taking guitar lessons from the great jazz guitarist, Steve Salerno, at Coe College in Cedar Rapids. Salerno (NYC native) gave Paul new inspiration, and serious, intense study of jazz (swing/bebop, and modal) music for the two years. "At that time, my heroes were John McLaughlin, Pat Martino, Joe Pass, etc, and my music listening tastes were expanding to different horn players, East Indian music, as well as Charlie Parker, Ravi Shankar, and local-international recording artist/trumpeter Paul Smoker, who was also an instructor at Coe College"...

Paul's parents were very old when he was born, and being an only child, they became sick quite often, Paul had to care for his parents as early as age 16. After playing in various local bands and writing original compositions, and gradually learning how the music industry works, Paul got a booking agent, Jerry Pace, based in Lincoln, Nebraska, and went on the road to play in various lounge and cruise bands in the early 80's. In that time period, Paul found himself touring the south, and jamming with the likes of Stevie Ray Vaughn, Billy Cobham, Hall & Oates, NIN, Tina Turner, etc. Also developing a knack for the new technology of synthesizers, drum machines, programming, and recording studio experience. After meeting guitarist Eric Johnson in a music store while playing Dallas, Texas, and an inopportune timing of his parents falling sick again, Paul returned to his hometown of Cedar Rapids, to focus on recording and composing original music. "Eric Johnson just signed a huge recording contract with Warner Bros, and Eric's career was propelled by a boost from Prince", while showcasing all-instrumental jazz-fusion original music. "I didn't care to play in road bands as a guitarist for hire anymore, I had a huge imagination, and hundreds of musical ideas to record and share, and Minneapolis is a few hours away from here, there's a whole new music movement going on there right now"...

Paul recorded and performed at Prince's studio, Paisley Park, on and off in the years 1988, and 1992, playing guitar and bass, as well as producing and programming synth keyboards. "Skipper" (nickname for Prince) had the most incredible work ethic, and everything he did, (whether is being music, ping-pong, basketball, and cooking) he'd put in 150%, I'd never seen anyone with that much creative drive, ever". In 1986, Paul's band, the Cedar Rapids based-band "Atta Glance" won the Midwest Battle Of The Bands, also producing the hit: "I Don't Wanna Live 4 Ever" written by Atta Glance keyboardist Chris Harger. Paul's mother, Maxine Dezelski, passed that evening after the show, hours after telling how proud she was of him...

Being located in Iowa, the cities Minneapolis, Chicago, St. Louis, Omaha, Kansas City, were all in about a four-hour drive from Cedar Rapids, luckily. Paul friended local rapper and music producer, Sonny Butler, and started collaborating on original material, which in turn, leaded into a recording contract with Millionaire Records, in New York, also. The rap group "Soldiers In Command" had a hit with "Dope Mic 4 Sale", from their album, which Paul co-composed and co-produced. This was the only rap artist from Iowa to get a major recording contact to date. In 1996, Paul's father, Frank passed from cancer, halting any plans for travel for two years. Thru the late 90's, to the new millennium, Paul travelled on the road with various bands, recorded in various studios, and wrote many compositions. Suffering from a torn index finger ligament on his fretting hand in 2004-2005, it was a tough road back to normal guitar playing. Longtime friend, Dave Schultz (of the Dave Schultz And The Dry Heat Band) relocated from Arizona to Iowa, and Paul then took the lead guitar spot, also touring the Midwest playing all original "Tex-Mex Rockabilly" music for three years. in the years 2011- to present, Paul was still playing/producing and recording music, as well as working as a in the information technology field, and as a webmaster and graphic artist. Paul is recording his second independent album release, as well as playing in local band jazz-fusion projects in Des Moines, Iowa, where he now resides.

Miles Davis, Weather Report, Jimi Hendrix, The Beatles, Ravi Shankar, Jeff Beck, Jaco Pastorius, YES, Charlie Parker, etc. All types of music/musicians. The Nine Inch Nails remix I did is just Trent Reznor on lead and backing vocals. all other NIN tracks, were removed by Trent, and added my own. (Warning: lyrics may be explicit on uploaded song)

Originally from Cedar Rapids, Iowa, looking for mgmt/AR/established working band, etc. I compose, arrange, produce, perform, any play many instruments, as well as sing. (main instrument is lead guitar) My original music ranges from top 40 hits, R&B/Funk,Techno,Jazz/Fusion instrumentals, to plain blues, soul, rock, and country music. I have 40 years experience with all styles of music, have an offer from a major record company, (Loud 'N Proud Records) and formed my own band, Gang Of Gain, a guitar/bass/drums trio (which I eventually took it upon myself to play all the instruments) I also have road-ready gear, and various music studio/stage production, skills and equipment.

I've had 3 major label deals in my lifetime (SONY, Interscope, and Millionaire Records/ATCO) I am working with two major record labels currently, finishing up some guitar-oriented instrumentals which they were looking to showcase with. I also have a few more commercial Funk/Rock/R&B vocal songs I'm working on, as well as mixing/producing some local artists and a major motion picture music scoring opportunity recently. I also have various multi-media skills and design websites/apps/software, and music production equipment.