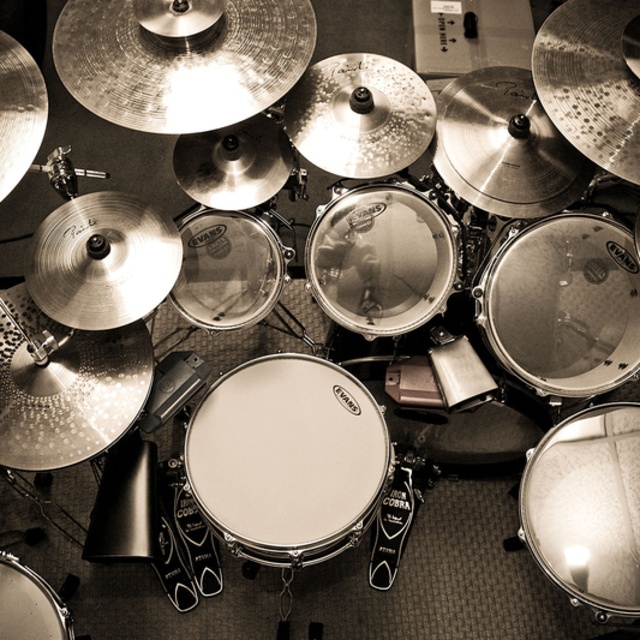 Well, I am 41 years young, married for 20 years, 1 child and have been working at the same job for over 12 years. It is because of the previous sentence that I play drums. Since I have an awesome wife, partner, friend, and because I have a great job which affords me not only time, but money (in the form of bonuses) that I could afford the amazing drum set that I currently use! In 2003 I received a substantial enough bonus that my wife suggested that because I am such a musicophile (read that as a musical whore), that I might want to try my hand at drumming (which I had tried with failure in my early teens ((a very short time)). I have always enjoyed a challenge, both physically and mentally, and the choice of the drums was easy! The perfect blend of both physicality and the mental challenge of keeping time wherever it may roam really appealed to me.

I decided I would give it another go. I bought the name I knew (TAMA) and the cymbals I knew (Paiste). I have continued to proclaim and profess the products ever since. Although I like all drum brands very much; all the top tier manufacturers summarily make great products!!! But some of my favorite drummers used them; namely Stewart Copeland of the Police.

In any event, I have my drums at my rehearsal studio here in the SF BAY Area and they have been there ever since. I never wanted to have to hassle with the neighbors over playing time, and I certainly didnâ€™t want people to have to hassle over my noise. Initially, I didnâ€™t want to get lessons, as I wanted to spend as much time as I could just figuring out the basics before shelling out a bunch of money and time to learn things that I can do on my own using DVDs and the internet. That is what I have been doing off and on over the past years. I have, on occasion, taken a lesson or two with Joe DeRose and Jason Wall of SJProDrum when I get stuck.

So, where was I? Oh yeah, I am pretty much an auto-didactic drummer (self taught) and to be honest, if I had really put a number to how many years I have been actively playing it is about two years, as I havenâ€™t always been able to play nearly as much as I think about playing. My job and other responsibilities often come up. This year has been pretty good for me though.

I have previously played in a few bands, but they tend to never go very far. Many just come until something else comes up. As per usual, they will eventually find greener pastures or just quit all together. I used to think it was me, but other musicians who know the offenders tend to say that it is the nature of the people involved. I feel that even at my very inexperienced level there are reputations to uphold, as I donâ€™t consider myself a pro or even and intermediate drummer by any means, so my reputation is everything. So is honesty and communication. If I donâ€™t like or donâ€™t think I have anything to offer I will tell it. No need to hide around it. I didnâ€™t put a lot of money into my drums and drumming, my studio, and a few years of study time so that I can beat around the bush and waste more of my time and money.

I enjoy music, I enjoy playing, I enjoy the challenge, and I enjoy meeting people.

Screen name:
paulma30
Member since:
May 24 2013
Active over 1 month ago
Level of commitment:
Committed
Years playing music:
8
Gigs played:
Under 10
Tend to practice:
2-3 times per week
Available to gig:
2-3 nights a week
Most available:
Nights

My influences range from oldies to goodies, known to lesser known, and the usual suspects: Stewart Copeland, Gavin Harrison, Dave Weckl, Steve Smith, Vinnie Coliauta, Manu Katche, Chris Adler, Mike Portnoy, Danny Carey, Nick Mason, Scott Rockenfield, Mark Zonder, Celso Albierti, Dennis Chambers, Marco Minnemann, Todd Sucherman, and Casey Grillo to name but a few. These are drummers I listen to on a regular basis but by no means are the limit to the music styles and drummers I enjoy. These are the drummers I aspire to have some ability to emulate technically and artisticly. If I had to name a drummer I model my sound after; it is probably Gavin Harrison and Manu Katche, and a bit of Vinnie Colaiuta. I love their phrasing, their dynamics, their backbeat, and their accenting. They are tremendously subtle, but extremely complex as drummers and musicians.