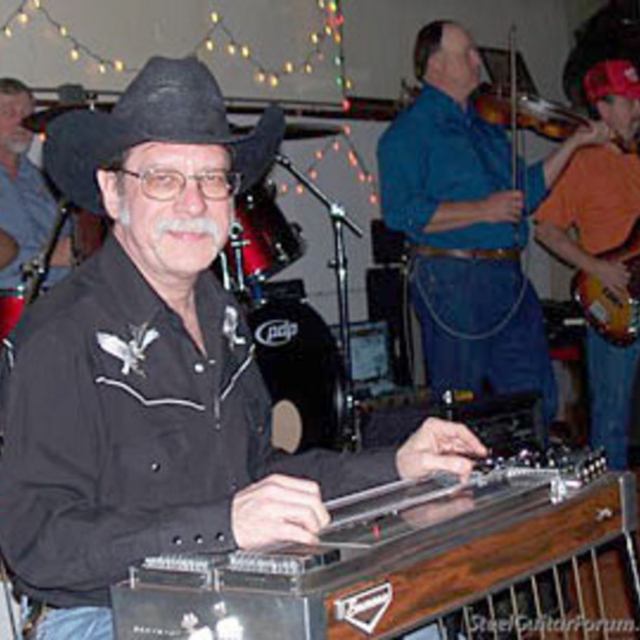 I am available for steel guitar gigs on Wednesdays and weekends, within a 70 mile radius of Flint, Michigan.

I have the "Nashville Sound," produced my genuine Emmons pedal steel guitar, all hot-rodded up for speed and sustain. It's got tone to the bone and is ready to go to work for your band, or recording project! I read Nashville number charts for originals and recording sessions.

I am a pro and am looking for paying work, in and around Michigan, on recording sessions and with gigging bands. I can play most anything that has gotten airplay in major Country radio markets in the past 50 years. I do Classic, Traditional and New Country and Country Rock. I use various effects, including a convincing Dobro simulator pedal.

For gigs of low to medium stage volume, I can play my real Dobro. I also play rhythm and sing about a dozen Country songs.

I have a website with my complete bio and audio samples, at ://.wiztunes - with a contact form, should you wish to get in touch about business matters. I can also be contacted via my profile: s://./wizcrafts (Wiz Feinberg), or via : wizcrafts.

At this time I have occasional weekend bookings with Kenny Kens and Joey Vee. I am currently a freelancer, but will join a band with a decent paying steady gig.

I would categorize my playing style as "commercial." I try to play it like the record, to the best of my ability. When I am in the studio, making a record, I play as requested by the artist, or producer.

I will be playing with the Pole Barn Rebels Band (PBR), at Jack's Place, in Flushing Michigan, on Friday, August 19. Show starts at 9 something PM and ends at 1 something AM.

This is a tight, new and traditional Country act, with Southern Rock thrown in. It should be an enjoyable gig.

Aside from that, I play in the Flint, Michigan, #629 Fraternal Order Of Eagles, every Saturday and Sunday night. The club is on Dort Hwy, 2 blocks north of Davison Road, at the corner of Bennett and Dort. It shares a parking lot with Forrest Custom Motorcycles shop.

Are there any professional musicians/band leaders who want to put a Country-Country Rock band together for Wednesday nights? Need PA head, monitors, mics, cables, stands and your own amplifiers. Powered speakers are supplied by the club. I will play steel guitar in the band. Contact me soon!

I play steel with the Ace High Band, a 4 piece band, at the #629 Eagles Club, every Friday through Sunday. The Club is on Dort Highway, at the corner of Bennett Ave, two blocks North of Davison Road, in Flint, Michigan.

Show times are 8 PM until 12:30 AM, on Fridays and Saturdays, and from 6 PM until 10:30 PM on Sundays. We play a variety of new and classic Country Music and old Rock and Roll and Southern Rock.

Membership is reasonably priced, and required for repeat customers, but professional musicians are always allowed in on Sundays, as long as you sign in at the front desk (as "Band"). Infrequent guests may sign in under my stage name: "Wiz" - as I am a member of the #629 FOE.

Food is served until 9 PM on Fridays and Saturdays, and until 8 PM on Sundays.