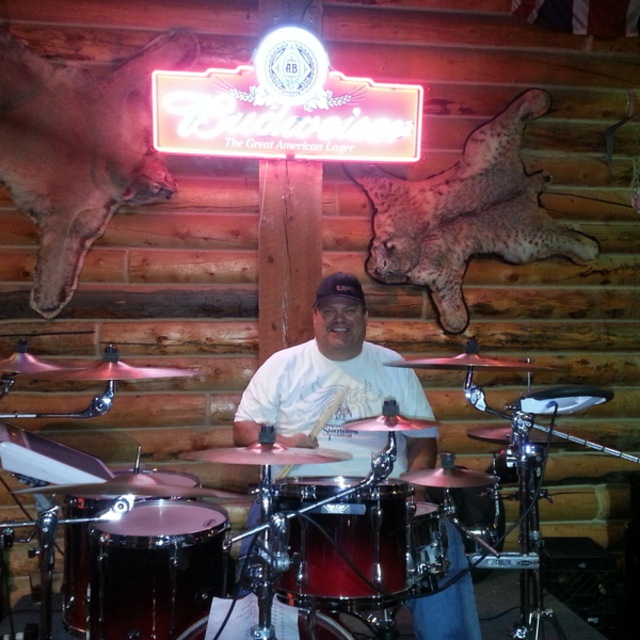 I've been in working bands in both blues and classic rock for many years. I'm interested in playing hard rock or soft jazz and my new interests include electronic pop and prog metal. My musical tastes are varied and my playing skills are versatile and well seasoned.

I'd love to play clubs and parties or just jam in the garage and make some great music.

I've spent the last 7 years playing classic rock with the band 'Up in the Night' We've played in clubs and bars mostly around Utah, Wasatch and Salt Lake counties. We've played 2 or three weekends a month.

I started playing drums in 1979 when I was 14. I messed around with some high school buddies and one day my bass player handed me two records. One was Fly By Night, the other was Moving Pictures. I stayed up all night listening to them over and over. I was hooked and became a quick Rush fan and a student of Neil Peart. In addition to garage bands, I played in high school and college bands. I went to Snow College in Utah and played in the jazz band there.
Eventually I got serious about college and sold my drums in 1989 to help pay for school. I took a hiatus from playing until my wife bought me my Roland V-Club kit in 2002. It came back so quickly for me. I played every day for many years. I finally found some good musicians and friends here on Band Mix back in 2006 and I've been in working bands ever since.
My last band, 'Up in the Night' wanted to do a country music project and tour the mountain west. I wasn't interested in country music or touring so they found another drummer and they are doing quite well. We still play a classic rock gig every few months, but I'm ready to find some more friends and play some awesome jams!

I have a 9 piece Gretch Catalina acrostic set mixed with some electronics pads a foot switches for effects.

I like to use the Roland kit for rehearsal since it has a volume knob.

Investing in hardware is not a problem for me.