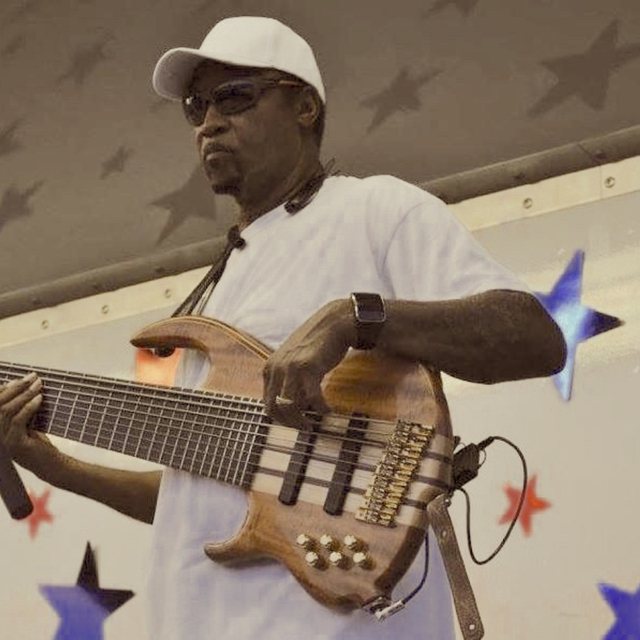 These Songs sound too good not to share. Check out solo in Man-eater, Rick is playing that one. LIKE IT. Excellent drum work by Terrance Campbell on Medley of Songs too.

PROFILE - My earlier recording sessions and touring started with a very wonderful lady by the name of IRMA THOMAS. Video #1 is a recording of me playing bass behind Irma Thomas at the New Orleans Jazz Festival. I am on 4 albums with the latest, the song "New Rules" on the "The Soul Queen of New Orleans" Album released in 2011.

As indicated by the last album, Irma Thomas is the "Soul Queen of New Orleans" and it was an honor and pleasure to know her. By her fame, we traveled the world playing her music alongside such artists such as SANTANA, and B.B.KING, and I "must say," because of my contact with these artists my vision of what it takes to be professional musician became clear.

You will find pictures of two of the many albums cover in my photo section where I have played bass on in my bass playing career with the song "BABY I LOVE YOU in video #1, Song #3 on my list, and #2 on the album "The Way I Feel.". You will also find a list of musicians which including my name for one of the albums, "New Rules" at "://.cduniverse/search/xx/music/pid/1002943/a/New+Rules.htm". Enjoy,

Note: Just added "For You Glory" (Song #4 - 6/5/2012) with a dynamic and very controlled singer name Cliff Coolie. Because of copyright reason, you hear the end of the song, but even with this, you can feel the level of intensity and focus of Cliff, demonstrating his vocal range and control. Walter has proven to be an excellent writer with a gift to write many songs and they all have very different feels. Between Cliff, Walter, and Bruce as the Technical Engineer, the songs keep coming. Good luck to them all.

Song #1 named "Apple of my Eye" by Vonda Williamson with the vocals to come is still a shining star in my bass creativity. I expect her to bring that track to life with her energy and vocal ability, with the help of Bruce Brown one of the best producers in the business. In "Apple of my Eye" I am doing the bass, and solo going out.

I am playing the bass tracks on all of the songs except "B Side", "Choices", "Te Quiero", and "Mercy Mercy Mercy" where I am not playing the bass, but the lead (guitar sounding) melodies. I enlisted the talents of another bass player to make these songs happen. Enjoy.

THIS IS MY MUSICAL RESUME. The song list "above" represents a cross-section of the many forms of music I play. Even though this is a small cross-section of contemporary gospel, jazz, rap, and hip-hop, to neo-soul, and blues there is more, as I continue to seek the challenges that new forms of music bring. I have also attached videos of the different groups I have had the honor of playing for as they have also helped me to expand my abilities.

I am always looking for serious group(s) interested in doing their best and taking their craft to higher levels. I play it all, from gospel to funk, with a lot of R&B and Neo-Soul for a good mix. I can be contacted mostly anytime. I am just one with dreams of doing more. I do wish to expand with a group to a different level with my talents being added to the many others that will, in the end, make a difference in the musical world as seen by "Choices" and "Te Quiero" where I play the melody with a 2nd bass player playing the bass in a live session. Check out "Choices" and "Te Quiero" and tell me what you think. "Go Figure" in the song list is a Neo-Soul with great potential and already rave reviews at her last performance. The bassline was one that I enjoyed creating. On "Cry Out" I start the song with what sounds like the guitar intro but is real bass. These tracks show my versatility and ability to do more than play bass when needed. If you read this far thanks for the time you gave me, and please send me info on you that I may do the same. Remember "time" is our most valuable asset so use it wisely.

Because of my association and conversation with these accomplished artist, I was greatly influenced to be dedicated to my craft. Today, I am influenced by many more people who continue to peaked my desire to play bass, guitar, and music knowledge a like, with great respect and acknowledgement to guitarist Norman Brown, and Jay Soto, and Paul Brown for my present style of playing. My others influences range from Tower of Power on the bass end to Wayman Tisdale on the more progressive end, with a little of Stanley Clark sprinkled along the way. The song "Choices" in my play list is my first very recent attempt at playing melody like Tidsale. i would like to incorporate this play this style into my playing with some open minded musicians who are willing to support this talent, at some point. I love playing bass, melodies and some guitar and rhythm licks. But above all I am a "bass player" first, and understand this in every group, or studio session, I have ever done. I am just one with dreams of doing more and being a team player and supporter of good leadership.

I do wish to expand with a group to a different level with my other talents being added to the many others musicians, that will in the end make a difference in the musical world. This desire to branch out is seen by "Choices". Check out "Choices" and tell me what you think.

"Go Figure" in the song list is a Neo-Soul and has had great reviews from the performing artist and a few more notable artist in the industry. It also received rave review at her last performance coming in second in the top picks for new songs. This bass line was one that I enjoyed creating, the song is good and the overall quality makes for a hit. i have also been exposed to Neo-Soul and 3 piece Acoustic Sets and enjoyed them.

Remember "excellence" start with the ability to shoulder a criticism and not bend under its weight. Good musician do not bend or yield, they survive and improve.

DISCLAIMER:
All songs on this site are here because I am either the bass player or doing a solo, with some of the songs arrangements co-authored with Bruce Brown and Walter Morgan on their songs, My listing of these songs represent my rights to the use of them as a demonstration of my creative contribution to their birth and existence. Please enjoy them.

Most equipement need for gigs and some.