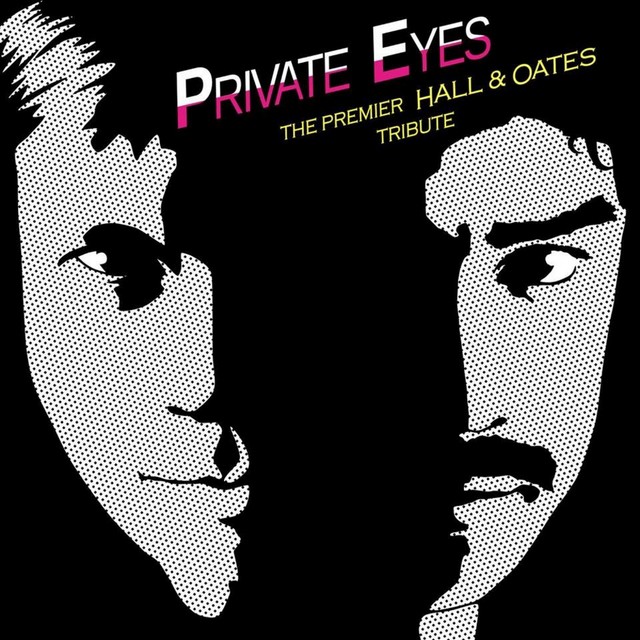 Private Eyes, a Tribute to Daryl Hall & John Oates, was formed in 2018. Their mission was clear and precise: to deliver the timeless music from the best-selling duo of all time. This Los Angeles-based band is the only Hall & Oates tribute to feature note for note renditions of all the greatest hits as well as some choice fan favorites.

Founder, Music Director, and Bassist Chris Willshire undertook a nationwide search for the right vocalist who could replicate the blue-eyed soul of Daryl Hall, only to find frontman Mark Wilson in his own San Fernando Valley backyard. Mark is a graduate of Berklee College of Music, and his diverse background includes having toured with Frankie Valli as one of the Four Seasons, serving as an opening act with the Marcels for Tina Turner, and contributing background vocals for John Denver & Garth Brooks. He has also been a member of the Grammy-nominated Los Angeles Jazz Choir.

A TV editor by day, Bassist Chris Willshire’s credits include promo material for such CW shows as Supernatural, The Flash, Arrow, and Black Lightning, in addition to episodes of Bravo’s Top Chef. He met future Oates, Nate Beausoleil while working on the HGTV shows Flip or Flop and House Hunters. Nate is an in-demand Field Audio Engineer for House Hunters, as well as for indie films and documentaries.

Drummer Mat Miranda has performed at multiple Disney properties as well as on international cruise ship tours. He is also an acclaimed drum line instructor and a Top 3 finalist at the Indoor Drumline World Competition.

When Tyler Varnell isn’t playing his sexy sax and keyboards for Private Eyes, he works as an award-winning and nationally ranked wedding/events entertainer. He honed his formidable musical skills at Berklee’s College of Music and Pepperdine’s Jazz Ensemble.

Andre Ribeiro doubles as our soundscape secret weapon, recreating H & O’s trademark synth textures. He has extensive live experience as a drummer and keyboardist/programmer, as well as providing lighting and production services for such stars as Mumford and Sons, Ashlee Simpson, and Queen Latifah to name a few.

Luke Linsteadt comes in as the utility man playing sax, guitar, and wailing high vocals. He can also be seen all over the country performing in musicals. Most notably, you can frequently catch him playing Elvis in Million Dollar Quartet, The Musical.

Now who can’t go for that?