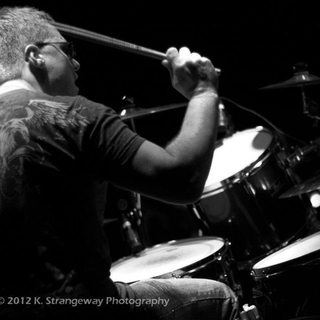 I’ve had a love for drumming since I was 6 years old and I was and pretending just about anything within my reach was a drum. I got my first kit when I was 4th grade, a 1970’s Fibes fiberglass kit, and I’ve been playing ever since! Music such as AC/DC, RUSH, Everly Brothers & The Cure were early influences on me and, in time, my playing and lyrics style. I wrote lyrics and music and recorded with the band Wave Estate and released a full length CD in 2000. While playing in Wave Estate I ventured out into several different bands playing blues, rock, and Pop. I even played with the Comstock country recording artist Paula Mengarelli. The Paula Mengarelli Band had number 1 songs in several countries and we played consecutive years at The Taste Of Chicago. I’ve had the pleasure of being in The Blind Roosevelts for the last 16 years. We blanketed the St Charles area playing clubs and festivals from the burbs to Chicago.