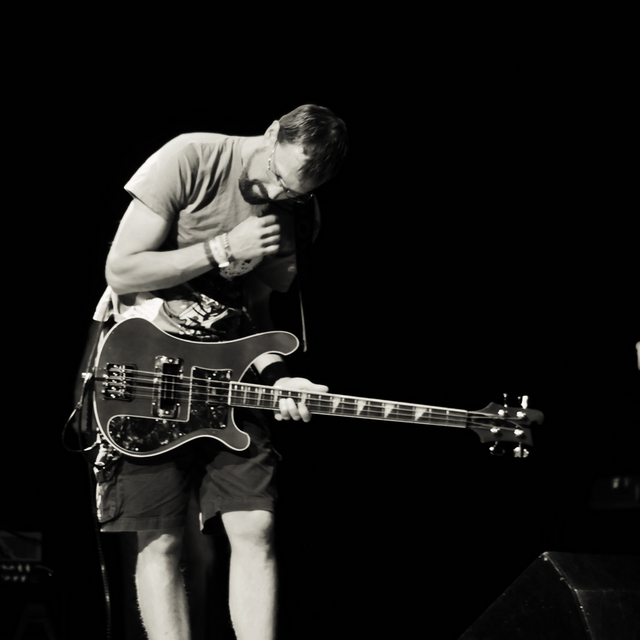 I've been playing original music and covers around the front range since the early 90s. I've had a little experience in jazz at school but I am primarily a rock player. I understand chord structure and have some experience following chord charts, but I am not a sight reader. I am comfortable playing in many time signatures, not just 4/4 & 3/4. I'm a technical player who can create interesting lines without loosing the feel of the music. I can lock it in when unison is needed, keep it low and simple when that solid foundation is required, be aggressive and searing when things get chaotic, or improvise when the music get exploratory. I can sing and play but I have a low voice and I'm not much good for anything except backup vocals. Past projects include Protosonic, Leaded, Bushtic, Neighborhood Landmine Project, Spiv, Stasis, and others.

I have been listening to a lot of Post-Rock/Metal lately and would love to be part of something along those lines. I am open to being in a tribute band if it is the right one. Are there any Chris Cornells out there looking to do a Soundgarden tribute? Or a Post-Rock tribute maybe? We are planning on putting the Protosonic band back together in the future with the addition of another guitarist and keys, or maybe someone who can bounce back and forth between both. However, we don’t have a place to practice right now, so that is on hold until we find a solution. In the meantime (and potentially beyond), I would like to keep busy and have some fun playing with some like minded people.

A bit about my character because I believe that being in a band is like being in a relationship and these things matter. I am reliable, responsible, reasonable, and mostly sober. I don’t have any problem with others drinking/smoking until it gets excessive and the music starts to suffer. I show up with a good attitude and ready to play. I can work through differences of opinion and musical disagreements without being hard headed, while still offering my two cents. I feel people’s spiritual beliefs are their own and prefer to keep it that way. However, I do not tolerate people who do not support ALL people’s rights. If you feel that being in a band is purely a professional endeavor and everyone should just keep their head down and get to work without regard to common values, go find that person, it’s not me. I would like to be involved, learn, grow, and create with a group of inclusive, respectful, experimental, talented, and fun people.

Back to the music, let’s make some!

I am a bass builder and I play my own basses as well as a hybrid bass/barritone (Bassitone) that I designed. I also have a modified Rickenbacker, a Music Man Stingray, a fretless Ibanez SDGR 5-string, and 4-string acoustic bass. I also have a few 6 string guitars that I built, and a 12-string Chapman Stick that I have played more in past projects, not as much lately. I have a Genz Benz GBE600 Head with a couple of Genz Benz 2-10 cabinets and a 1-15 cab. I have a good selection of pedals on my pedal board and I know how to use them.

My band NLP will having an EP release at the Boulder Theatre on Friday June 8th, 2012. We're playing with Bronze and A4 Animal, both very cool Boulder rock bands.

I will be playing bass for both opening acts this coming Sunday at the Larimer Lounge. NLP @ 8pm, Protosonic @9pm.

This is original instrumental rock that I write and play bass for.