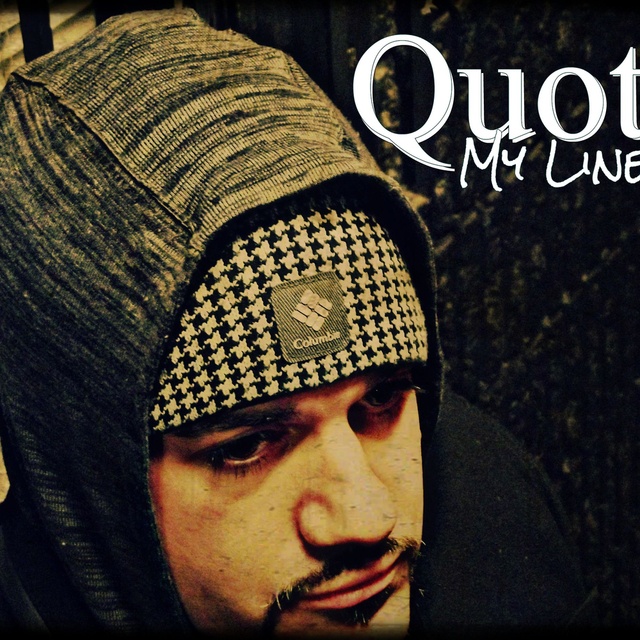 Rapper Quote got his first taste of music at around age 3 when his great grandfather, a mandolin maker from Portugal, got him a guitar. From that day forward something “MUSIC” was going on with him. At the same age Quote’s parents divorced and his younger days were spent in a quiet neighborhood in Melrose Massachusetts with his Mother, aunts, uncles and his grandparents. Their family unit was very tight and there was lots of love in those critical years. He jammed out to MC Hammer, Digital Underground, LL Cool J, Tone Loc as well as Bon Jovi, Bruce Springsteen, Madonna and basically everything that was on MTV. He preferred a music video over cartoons and playing with his his mothers vinyl records versus toys. The first song Quote memorized was when he was 6 years old. It was Turbo B’s verse on Snap’s hit “The Power.” His mother played the tape and Stevie B’s until they popped. The first rap he wrote wasn’t actually his own it was Tupac’s song “Changes” that he copied down after getting the tape and the first person he rapped it to was his grandmother who at the end of the verse laughed and encouraged him to keep practicing.
At age the of 7 he moved to the Riverside projects in Leominster Massachusetts, this would be one of five major moves in his life. This is when Rap became the more potent choice of music. Growing up in an environment where the young adults were influencing the youth, Quote went from an innocent child to a kid who would be walking the road towards Thug life. Since music was such a passion for him he quickly made friends with the other younger local rappers and dreams of stardom were etched in to his soul.
A few years in the city gave light to a pen & paper and at age 10 Quote began to write songs. At first the lyrics where more or less word play with no meaning, but then they began to take form. There was a lot of gangster rap being written in his lines and an aggressive behavior arose from it. The mentality was “Keep it Real” & “If you say it you better do it” Quote and a lot of his people lived by that philosophy. The lessons that came from those youthful days where plentiful and powerful. The influence of music was tremendous in Quote’s up bringing as well as his friends. The messages heard certainly helped aid him in some of the actions he took as a youth even though it took him to do it.

“Back in the day as rapper in the 90’s respect was the big word and keep it real followed, at least for my clique. So anything we did we thought to ourselves “I need to be ok with this” so doing dirt came easier. But reality is all of us where wearing a mask because that’s not how we were brought up.

Every other weekend Quote would visit his father who later on in life became as elf made millionaire and he was always playing Personal development tapes when they were in the car.

“I wanted to hear music instead of what I considered a lecture at the time. I was never fully interested in what was being said but I was paying attention and Luckily I had a father who cared enough about my future to put his foot down and remove me from the road I was traveling, several times.”

Through the years he was being taught by his best teacher, aside from life being the greatest teacher it was his father Jack Silva as well as Jim Rohn, Mark Hughes & Pastor Robert Thieme Jr. Needless to say through his elementary days & high school years he was not a good student and was extremely rebellious throughout the 6 different schools her attended. If it wasn't for the love of his tight nit family Quote would most likely have been a statistic in one or more of the following nouns; Prisoner, gang member, drug dealer, drug addict or with his hands on his shoulders in a casket and in the grave, Dead.
In 1999 the paradigm shift began when Quote was taken away from his “family” of kids without direction. Life forced him into reflection and he found inspiration in other music, hip hop. He started listening to more of positive vibe Hip Hop with artist like, Talib Kweli, Mos Def, Slum Village, The Fugees, De La Soul etc. He could never give up listening to the music that made him fall in love, but introducing more of the conscientious lyrics became a big game changer. After the growing pains of separating from the streets the quiet started to become joyful and a new way of thinking came to be. Rapper Quote realized how much music meant to him and what type of person he allowed himself to emphasize.
At this point of time the seed was planted for Personal Growth & Development Rap. He knew he wanted to give his fans and followers, especially the youth, more than just music. He wanted to give them music that would influence the positive inside of all of us to shine to off set the negative the world is engulfed with. Quote is currently working on a free Mixtape called THA HIjAQ Volume 2 which you are probably listing to now. This is a mixtape comprised of mostly classic 90’s instrumentals that are fueled with soul.

“I translate every instrumental through lyrics and become one with the music, it becomes part of me. The producers work wears his soul and my lyrics and flow wear mine so when the track is in the process of being created we are soul exchanging. Its always an amazing feeling when I get into that zone, its like i’m not the one writing it. I highly respect each and every artist associated with the productions I am jumping on. Call THA HIjAQ a giant remix of soul exchanging.”

Any music with soul and hip hop & R&B music.