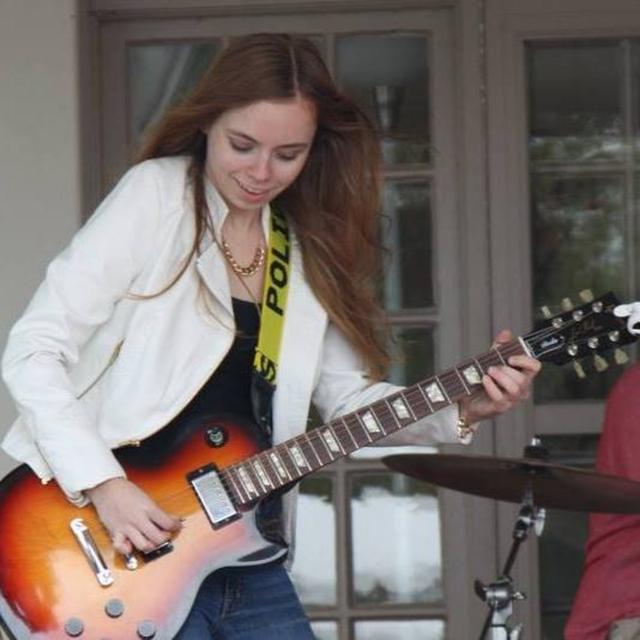 Radka Kasparcova is an 18-year-old guitar talent from Collegeville, PA who has already establish herself as a major blues artist. After receiving her first electric guitar at the age of 10, she began to take lessons at the “Music Training Center”. While there she participated in multiple All Stars Rock Band Camps, guitar and jazz ensembles, and on multiple occasions at the World Café Live as a part of their “Kids Rock for Kids” series. Radka was a member of her Methacton High School Jazz Band as well where she took lessons with legendary jazz guitarist Pat Martino as her appreciation of the guitar flourished. In September 2016 Radka started her studies at the DePaul University in Chicago as jazz guitar and finance major.

In 2012, Radka teamed up with her friend, Tori Melhart, a rising teen country artist who hit #1 ranking numerous times on Reverbnation, to record an album titled “Not A Fairytale”. The team traveled to Nashville, where they performed at several venues, including the famous Bluebird Café, and their song, “Just Have to Stay”, won the prestigious Philadelphia Songwriters Award in the youth category. In acknowledgement of her musicianship, Daisy Rock Guitar Company endorsed Radka into their artist roster, and she has been featured three times at That’s So Philly, an organization featuring young musical talent in the Philadelphia region.

In 2014, Radka was invited to the stage by blues superstar Buddy Guy and his protégé Quinn Sullivan. Performing with them in front of 2,000 excited fans inspired her first original single “High School Blues”, released in the same year. Radka fell in love with blues as she wrote her second single, “Wasted Years”, on which she collaborated with local talent, including Grammy-nominated harmonica player Mikey Junior and producer Glenn Barrett, and blues vocal master Jessi Teich. Radka has also been an active participant in the local blues jam scene, performing at hot venues such as BB King Blues Club, The Red Lion, The Reef, The Bitter End, and many others along with invitations to numerous sit-ins with major local blues acts.

Despise to her young age, she was mentioned in Blues- E-News magazine as one of the Top 25 women in blues worldwide. In 2015 and 2016 Radka was a recipient of the scholarship from the Blues Foundation which led to her attendance to five blues guitar summer camps across the USA including Berklee Guitar Sessions, and she won several awards including Berwyn’s Picks 2015 and “Best Musician” at Methacton High School. She has shared the stage with famous guitarists Don Evans and Dave Fields, blues greats Peter Karp & Sue Foley, Joanna Connor, Mikey Junior, Georgie Bonds, and many more. Radka is an experienced performer with over 300 performances at more than 100 different venues, nationally and internationally.

Her teenage blues band, Time Gap, created from young local blues artists, is a refreshing breath of fresh air with the collection of original and cover songs, which they perform regularly at the blues festivals and charity events such as The Phoenixville Blues Festival and Winter Blues Festival, and major venues such as The Sellersville Theater and Twisted Tail. The band represented Philadelphia at the International Blues Challenge in Memphis in January 2016. Just before their trip to Memphis, Time Gap released an EP titled “Flashback”, composed of all of their original, modern blues music. This CD was very well received by the critics and it is getting major airplay all around the world. In the spring 2016 Time Gap won the Philadelphia Songwriters Award in the adult category.

Since her move to Chicago to study Jazz Guitar and Finance at DePaul University, Radka has been extremely busy in the Chicago blues scene. Performing at House of Blues on multiple occasions, she has sat in with artists such as Joanna Connor, Tom Holland, and the Blue Olives. In addition to that, she has play at the Kingston Mines Jam several times, connecting with the musicians of the scene and playing for studio sessions. Her jazz combo also did a recording session at the IV Labs and played on DePaul's stage. She has performed at several open mics to prepare for her solo show at the International Blues Challenge 2017 Youth Showcase as well.

Radka currently plays Gibson ES-335, Gibson Les Paul Studio and Fender American Standard Telecaster, as well as cigar box guitar make by Thundaburke CBG. She is mainly using her Fender Blues Junior III, and her favorite pedals are King of Tone by Analog Man and Dunlop Crybaby Wah. She enjoys going to concerts, listening to new music. and traveling. Stamping her own style on the music of her all-time heroes, BB King, Albert Collins, Eric Clapton, and Johnny Winter, Radka skillfully interprets their creations with her unique touch.