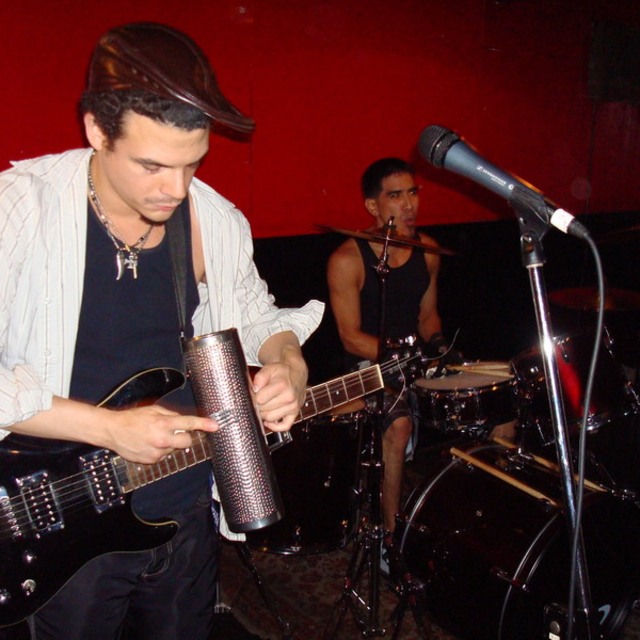 We experiment with at times subtle and then not so subtle Dominican merengue/ bachata rhythms and other latin rhythms as well. So being of a Latin back ground while not entirely important is somewhat useful in terms of understanding the dynamics of those rhythms.If you can play guitar or another instrument even better. There is at times very much a strong progressive rock element to what we do. In a musical sense one of the things we are trying to do is bridge where alot of good hard rock/metal was in the mid to late 90's (deftones, tool, system. etc) with the new wave of American metal bands like Killswitch Engage, As I Lay Dying and Lamb of god and adding some variations to it with some of our latin, merengue, bachata elements to it...Again just one of the things we like doing. We also love exploring the dynamics between being heavy yet instilling interesting melodic ideas as well as a ambient feel to things...So were looking for someone who has some sense of a clean vocal singing voice with decent range mixed with the ability to also scream when it serves the power of the song. Overall being able to sing cleanly is more important. the bassist and I can always add some screaming later. To say the least we are definitely still exploring our sound and we try not to put limits to what could be created as a result
At the end of the day even though we like to put alot of thought into our music and we make heavy music at times, we're still just a couple of 3 silly chill latin guys who love to have a retarded sense of humor and who like to have fun also drink a good cold beer as well..Were not looking to be famous so please don't respond if you are, were not looking for anal perfectionist's,(were all self taught but we learn alot from each other and are constantly growing musically, collectively and individually as well) we're just looking for a chill guy who's a local in the 5 boroughs who has the same passion for music as we do, has highenergy for performing, but has no immediate intentions to leave his day job just yet. We make music first and foremost because we simply love it, it becomes for us a outlet for alot of the insane frustrations of everyday life. We know eventually once we find a stable line up theres no limit to what we can do, but everything has its time. We love playing live and at local spots around the city and the 5 boroughs. We're open to play outside the 5 boroughs once were ready. We work with a promotion company so we get gigs easily When we play live were at times very high energy and at times mellow. Were all located in the 5 boroughs and were all in our mid 20's so were preferably lookig for someone also in there mid 20's ideally. Im 28, drummer 27, bassist 26. we all look fairly young Drummers from the boggie down bronx, bassist is from canarsie brooklyn, I switch back and forth from Washington Heights, Manhattan to bushwick bklyn.
you can check out our full band studio recordings and some raw recordings with new song ideas we're currently exploring as well at

Our general influences range from Deftones, Tool, System of a down, Killswitch engage, Lamb of god, Thrice, Mars Volta, Merengue, Bachata, Salsa even early 90's hip hop (so if you can rap beautiful but not required) list goes on.

We have a bassist, drummer and a guitarist, looking for a singer who wants to also contribute in the writing process.