RBCulver + Musician in The Colony, TX 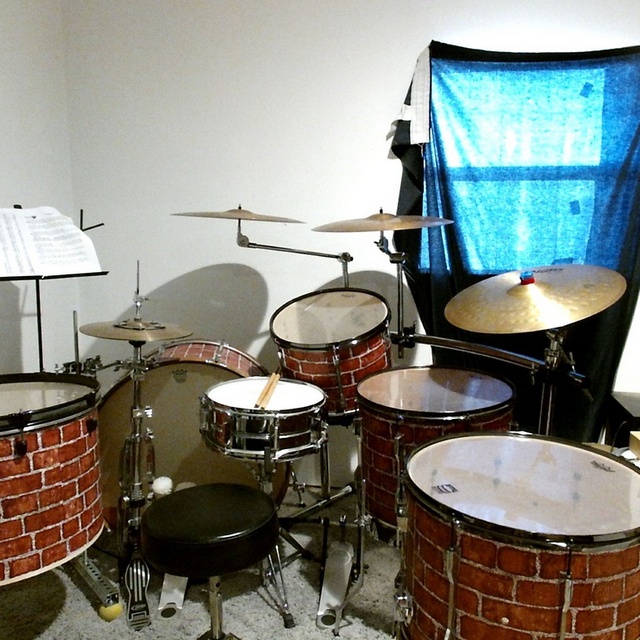 I am first and foremost a husband and father of three grown kids (last one a senior in high school). I am very interested in getting back into playing. It just needs to be understood family stuff comes first to a large extent. That said, I can make time if things get more serious. My family is supportive.

I can be contacted via my email, captbigdamnhero at g mail dot com, or phone/text (please state the purpose as I block unknown numbers after one time) nine seven two seven six five six five nine zero.

I was a bassist for years in high school until a nerve disorder kind of made that hard, though I have tried many times since. I picked up drums for the first 23 years ago, but eventually due to money had to sell them. Have played on my child's set for a while but finally built my own, see below

I have a drum set up and running now which work s for my immediate need. My sound is very boomy and washy. By BOOM I mean my 28" kick drum rings and fills with tone and resonance. It is not the tight, laundry basket sound of recent times. More akin to the old big band jazzers that influence Bonham, Ward, and that generation of drummers.

BTW, as you can see in the drum set picture, my library was a our garage, so I have plenty of room for another two-three people, if needing some practice space.

I'm looking for older (late 30's to higher, "boomers" welcome) folk looking to get back to playing themselves. Not looking for virtuosos as I am not one either. I'd rather have three or four people how play for fun and groove at a similar level than where one person just burns the place yet leaves everyone behind. usually means ego is involved. In this day and age, sadly, I must also say looking for older, libertarian-leaning people who just wan to have a good time and aren't so damn sensitive, have inappropriate senses of humor, and can talk about things other than music. For example, I actually have a MA in History, with a focus on the Middle Ages.

I do NOT do Christian music, remotely. Don't hate Christians, just not my faith. That said, I really am a live and let live type, and don't get offended playing a tune that has "God" in the lyric if it isn't designed to be religious. I realize I am a minority in that regard, thus am not going to get mad.

My sound is just that, mine. While I might adjust a bit, fundamentally I have worked hard to be happy with it.

I don't mind covers, but am not looking for tributes. Any cover should NOT be just like the album but the way a group would play it if theirs. I'd rather a band that starts with weird, groove laden covers of say 80's pop and such things that don't line up with the sound, but also gear toward writing originals.

I'm pretty good with words, so I can contribute to lyric writing as well as music writing and arranging.

Folk/acoustic groove, essentially using traditional or historical (medieval and modern) but with modern beats and some modern instruments.

Two bassists and a drummer: I have seen bands recently, usually djent-oriented, which just use 8-string guitars and octave pedals to not have bass at all. I'd love to flip that script and have a power trio with two bassists.

Bill Ward. John Bonham, Nicko McBrain, Alex Van Halen, Louie Bellson, and more. Many are as much about their sound as their playing, as I cannot pretend to match their skill. I just try to keep pocket, play with dynamics, and groove.

Looking for those influenced by the likes of Winery Dogs, Kings X, Clutch, Rival Sons, Blackberry Smoke, etc. Essentially groove should matter most. Though not a frequent listener, I enjoy Afrika Bambaata, KRS-One, and other old school 80's rappers.

Politically, I am a lower case "L" libertarian, so no Marxist or overly nationalist lyrics and attitudes. Groove and rock are about freedom and individuals doing great things together, not collectivism and falling in line, whether the line is left or right.

Looking for lyrics and songs that bring people up and together and those which tell stories.

Frankstein set made of older drums refurbished for my use. If you want someone with the newest, hip bright shiny, I'm not it.

Cymbals:
-3 20 crash rides of various weights and metals, designed to wash over the sound. Each can be used as a ride. All pretty distinct
-14 hi-hats, pretty basic.