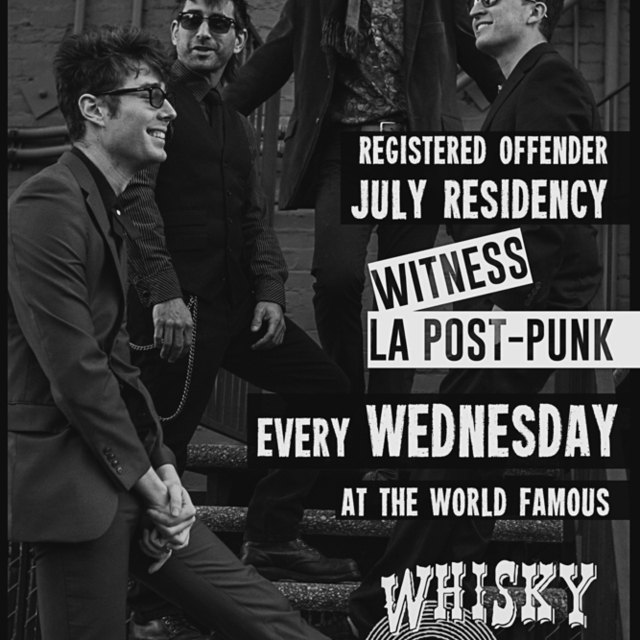 I have been charged with the tedious task of writing a short and sweet bio that makes this band seem like the next big thing and a real big sensation and so on.
Unfortunately I already know that what I have to say about the group will require of your attention span more than what owning a smartphone for half a decade has left your atrophied mind with. I will at least sum the group up with one word so you can get back to scrolling through your newsfeed like an asshole.

Dangerous is the word I would use.

For those of you offended enough to stave off the urge to return to social media for another several minutes, I would also say that Registered Offender is a rebuttal to a society that tailors its’ arts to become as politically correct and profitable as possible while remaining completely unconcerned about producing anything that could be considered artful or expressive.

This world is unwittingly turning its artist into gruff and hardened soldiers, at least it does so to the real ones.

To offer something true to a world governed by deceit is an act of war.

The Renaissance is proof that art and human expression have the power to topple even the darkest and most binding forms of governance.

This author agrees with the sentiment that the band you are reading about feels and this author knows their minds by witnessing their candid live show. The sentiment is that there has been a great trivialization of music that has been in effect for several decades. Televisions are rife with unimportant dog-and-pony talent contests that have convinced the world that having a look and singing well is what it means to be an artist.

Dear reader. It is likely that today you hopped in an uber and you heard a hip-hop song with the same prepackaged beat as the last one you heard In the last uber. You probably didn’t notice how bleak and soul-crushing the auto-tuned, mumbled lyrics about Gucci sneakers and pool parties at the Chateau Marmont were and you probably didn’t notice how your driver had no reaction one way or another to these attrocisties set to 120 bpms or the mind numbing commercials in between them. If you do notice these things, come to a show for I have confidence that R.O will prove to you that not everything in this world is disingenuous, though mostly everything is. Don’t get too excited.

It seems to be the belief of the band that If you are okay with the way things are now, you’re a fu*king idiot. This author has to agree with this sentiment as well.

To set the record straight, this author would also have you know that it is not his belief and it doesn’t seem to be the belief of this newly formed sensation of youngish heartthrobs that anyone is better than anyone else as it is plain that we are all equally in the same divided and conquered state of apathy - conquered both by external and internal quagmires.
The only difference between Registered Offender and most other sentient beings these days, dear reader if you are still with me, is that this band of four are simply pissed off enough to try their hands at making something true and it just so happens that they have an affinity for writing powerful music and are still foolish enough to try to climb a ladder whose rungs have rotted away and have been pulled off to no avail by so many other equally talented and foolish folks.