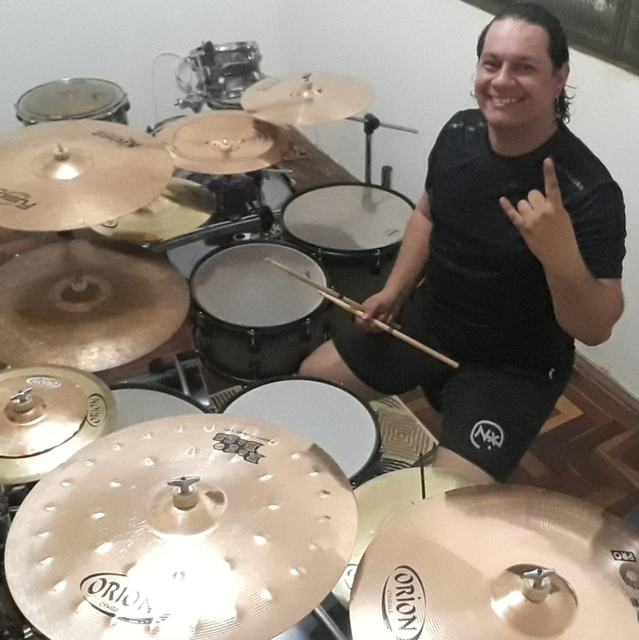 It’s impossible to attend a performance by drummer Renato Lima without being infected with the energy and emotion that the performance conveys. Brazilian, born in Uberaba, Minas Gerais, the musician began his apprenticeship at the age of 15. Essentially self-taught, and passionate about rock from the 70s and hard rock from the 80s, his shows are characterized by a firm grip and a lot of excitement, resulting in a separate performance, at the back of the stage.

The first band was created in 1999, a meeting of friends from school, moved by the curiosity to make a sound. In 2001, Renato joined the band “Espelho Mágico”, which played covers from the 50s to the 70s. One year later, he had his first experience of playing in the studio, when he recorded his first authorial works, among them the song “Cotidiano Blues ”. The first public achievement came in 2003, when he was in 3rd place at the Band Festival promoted by the National Center for Black Citizenship (Ceneg), in Uberaba, with the same “Cotidiano Blues”, performed with the band “Espelho Mágico”.

The local recognition boosted the dedication of the musician, who joined several local bands, such as “Silent Hunter”, who plays heavy metal and covers by Black Sabbath, “Stormbringer”, with a focus on heavy metal, “Metal Machine”, with a trash metal footprint and “Maddock”, known for hard rock covers. With the latter, Renato Lima re-recorded the song “Always”, by the American band Bon Jovi, and made three presentations with the participation of keyboardist Fábio Laguna (bands Hangar and Angra).

Currently, the musician is a regular drummer in eight bands: “Bside Square”, (prog metal, with a tribute to the Dream Theater), remains in the bands “Silent Hunter” and “Maddock”, and still divides his time between the bands Hammer Queen (heavy metal, DIO Cover and with a tribute to Judas Priest), “Booze4” (grunge and new metal), “Du Rockers” (focusing on national pop rock), “Triploo” (national and international pop rock) and “Rocket III” (pop rock). On several occasions, Renato plays as a freelancer. In 2018, he made a presentation with the Brazilian band “Black Pantera”, which has been standing out in the national and international scene.

The drummer is also dedicated to band management and takes care of tasks such as choosing and assembling the setlist, agenda and production. He is a drum teacher for children and adults.

Currently, Renato is an endorser of the Adah Drums, Gess Drumheads and Prostick® drumsticks, where he has a line of signature drumsticks Renato Lima (Model RL-7A).