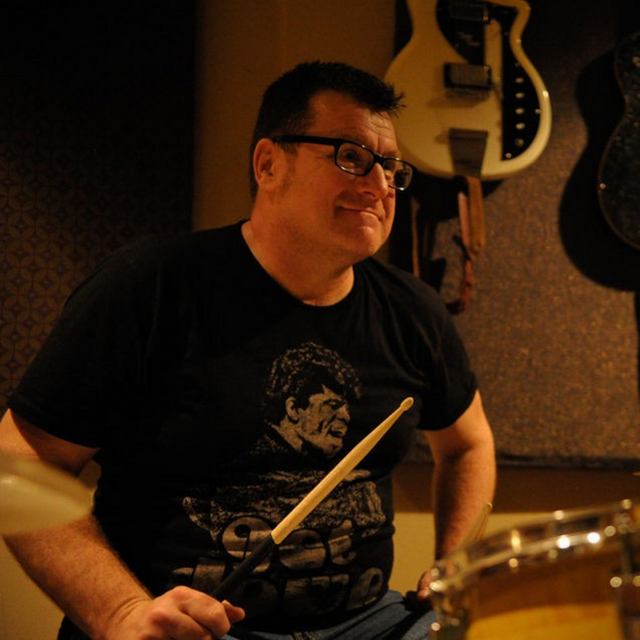 New to Richmond, and I'm looking for a steady gig. I'm hoping to find a serious, original band that needs an experienced drummer. Also, at some point I'd like to continue the Power Pop side project I started in Philly, doing mostly covers at first, then depending on the synergy, the level of motivation, and native talent, start crafting the band’s own tunes and sound. I’ve got a pretty substantial list of off-the-beaten path, and standard PP songs with lyric sheets and tabs/charts/links I’d like to cover, but mainly I’m hoping that whoever is interested will bring their own feel to the project. I’m looking for bass, guitar (lead), and vocals, so if you know anyone you might be interested, look me up, so we can chat. At: rwandover at g mail dot com, or (three Ws) : face book dot com / RGWandover

Been playing 30+ years. I play a mix of rock and derivatives, blues, garage, pop & soul. My project is called NiceTown (Philly), and I was working with Joey Perez (Blessed Muthas), Joe Adams (Tone Bandits), and Ian Vos (fmr. Low Cut Connie), and per-COVID I was with the band The Black Market Opera. A side project at this time was the never quite skyward band Voodoo Death Cult... Before that I was in the garage and soul band The GTVs who recorded with Rick Miller of Southern Culture on the Skids at his Kudzu Ranch Recorders--tracks mixed by Ron DiSilvestro from Forge Recording. We did a couple couple national tours during my tenure and opened for the like of the Plimsouls, Southern Culture, JC Brooks and Palmyra Delran. Also, at that time I was in a side project with "Slagmatter" with Metal Mike Reese of Loafass and Skinny Timo of the "Riverside Odds/Handsome Pete's."

A couple summers ago I did an east coast tour with desert rock band "King Bison" and I did a one-off with “Black Lodge Music Ensemble” for the Independent Rock school in South Philly.

Then I did a stint with the metal band “Syberia,” and I was with The Blessed Muthas 2011-2014. From 2010-11 I was in power pop side project with bassist Ross Munro and Matt McDevitt formerly of the band "Amerkulus.”

Between 2009-10 I was in the hard rock & blues cover band “Power of Three.” I've done sessions with the Gamble & Huff songwriter, Marvin Mitchell, and I've played with Rich Carter of the band “Plastron.” And I did a pick-up gig with the rockabilly band “Shaky Deville.”

Farther back, I played with Joey Wilson (RIP) of “Youth Camp/Hooters” and bassist Martel Fein (RIP), and I did a stint with guitarist Chris Unrath (most recently with the band "Action Party" & formerly "The Big Mess Orchestra" with Dean Sabatino of the "Dead Milkmen"). In '98 I worked with “The Stuntmen” with Ben Brower--also formerly of the GTVs.

I transplanted from Seattle 1995, and I hung with the likes of Carl Hinds of Dandelion/The Shemales, Gerald Collier of the band "Best Kissers" (who toured with X), Marc Olson with the band "Sage, "and fellow drummer, Nate Johnson of “Flop” & the “Fastbacks” (post Duff).

There was a brief association with my former UW classmates James Lane & Kurt Danielson and the band Bundle of Hiss, and later for Kurt, in the grunge band Tad. Anyway, I was in several bands through the 90’s in Seattle including the "DeMile Brothers" blues band, & “Hoi Polloi,” with Jim Stapleton, a great songwriter from Flint, MI., and I was lucky enough to hoist a few with another amazing songwriter Jimmy Silva.

As you may gather my influences are pretty varied, but overall, I'd say I have post-punk/post-rock sensibilities, with one foot in the grunge grave, and just enough technique to handle R&B & blues.

So, if you need a drummer, hit me up & thanks for reading.

Too many to list. I dig Ian Paice, Bonham, Bobby Caldwell, Tommy Aldridge, Vinny and Carmine Appice, Ray Luzier, Chuck Biscuits, Brooks Wackerman, DJ Bonebreak, Brendan Canty, Josh Freese--and many, many more. (And, what about Dave Lombardo? Come on, he's the fu*kin' master blaster...) These guys are a wide sampling of influences, but as musicians, and for me they are all genuine, each with a distinct style.