Robert-PRS + Musician in Princeton, IN 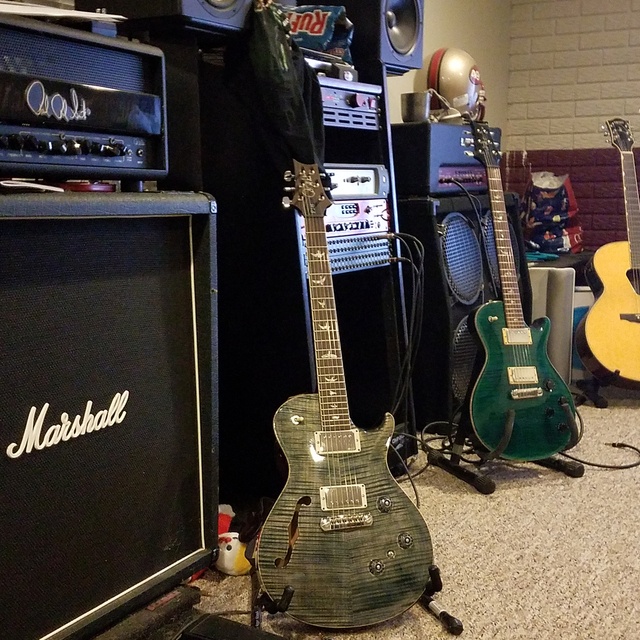 I started playing Guitar in 1983. I like all kinds of Rock 70, 80. Metal is what I play. I played a lot from 85 to 92. The money from the Job I had was too good so I put music on the back burner for a long time. I am a realist; I do not want to change the world I do not want to make a living playing music. However I would like to get back into it. I play rhythm guitar and am looking to jam with others and for the most part just have fun, if it ends up being a band great, if not Iâ€™ll have new friends to jam with. I like heavy rhythm and would prefer to jam with people that would like to write their own music. I have a very large house and a second two car garage thats used to store my Bass Boat, so a practice place is not a problem. O ya no neighbors to complain about the noise. Or would have no problem practicing somewhere else.

Since it will not let me upload a video. Here is a link to something I came up with this morning. Its recorded with a cell phone so is a little rough sounding. Also its just a rough cut of what was in my head at that time. COPY AND PASTE THE LINK BELOW.

Metallica, Death, Pantera, Black Sabbath, AC/DC, Iron Maiden, Judas Priest, Pantera, Opeth, Pantera, Pink Floyd, Suicidal Tendencies. O ya and Pantera. I like 70 rock as an influence. I know most of the music I play is not from the 70's. However as far as song writers, the 70's were the best. I like to play very heavy Riffs that are not even close to music from the 70's, however It is still great music to use as an influence for coming up with new sounds to go with the good crushing heavy riffs. the good heavy bands do this. The bands that do not just sound heavy with no real feeling to them.

I play PRS guitars, I have a full stack and PTS Archon 100 watt head, eventide eclipse effects processer. I have the basic Pro Tools system to record with.