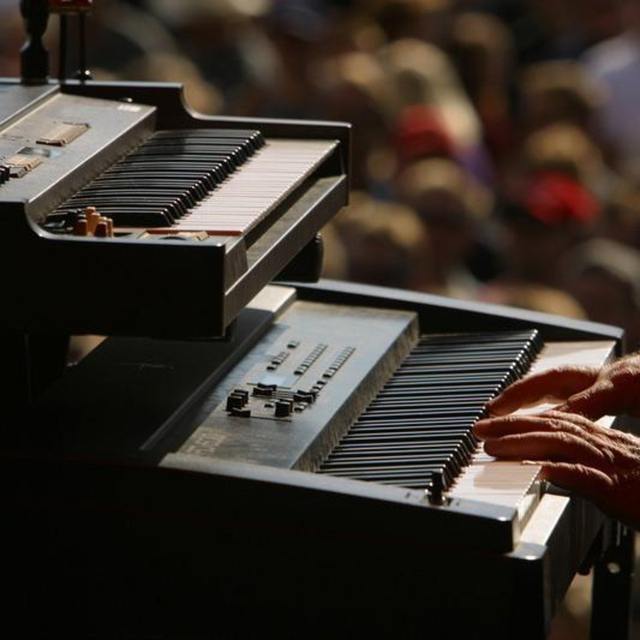 I am playing keyboards for a band that is currently trying to rebuild it's membership. When it has the full compliment of players the group has 14 people. Two keyboardists,rhythm guitar,lead guitar,bass, drums, percussion, trumpet, trombone,tenor saxophone,alto saxophone, and 3 female vocalists. I've been with this group going on 5 years now and it seems like we are always auditioning a new member ,which causes delays in rehearsals,in getting gigs. (gigs that actually pay would be a nice change by the way) A good friend of mine who played lead guitar with us for a while just left. We just auditioned two new drummers last night. I liked the second one better than the first,he's only 19 but his chops are a lot better than the other fellow. Our music director is good at being a music director but he doesn't really have a clue on how to run a band. I really want to find a group like this but one that is working ,one where it's members have been there a long time,that have a show put together,one that is at least willing to listen to new things and or ideas. 5 years I've been with this group and basically I'm not going anywhere. I've got good skills on the keyboards and my vocal skills are even better. That was actually my major course of study in college

My musical influences really came into focus when I discovered Chicago in the mid 70's.From there it expanded to Blood Sweat and Tears,Manyard Ferguson, Steely Dan, Manhattan Transfer,Gino Vanelli,Stevie Ray Vaughn,Blues Brothers,The Doobie Brothers , Little Feat, Toto. There are others of course, there's a lot of music out there. Someone once said " There are only two kinds of music, good and bad" That someone was Duke Ellington.