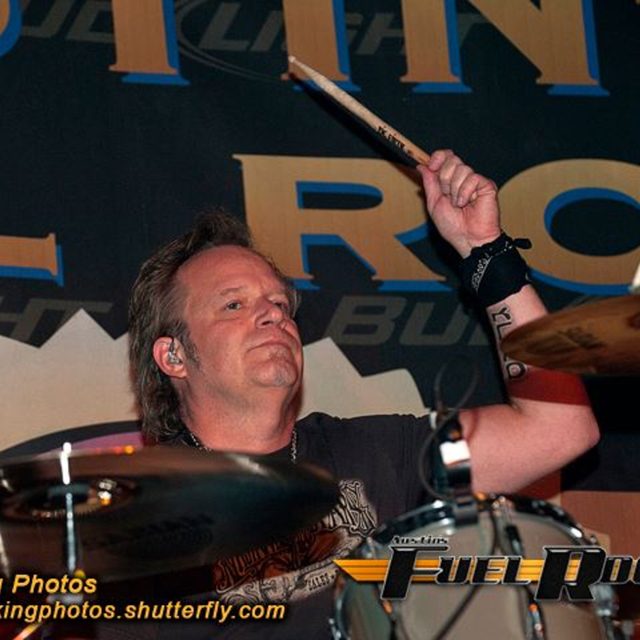 Drummer Robert Broz had his first professional gig at age 16 playing drums in a jazz piano trio that was the beginning of his career in music. “I feel very blessed to be able to make a living doing what I love, and I don’t take that for granted” says Robert. Along the way he has played in everything from jazz, blues, big bands and rock bands, to orchestras, country and Latin bands. Currently he is drumming for the country band Smokin’ Gunz. Playing throughout Illinois as well as Wisconsin, Michigan, Indiana and Iowa, Smokin’ Gunz performances average 100 - 110 shows annually. Along with clubs, fairs, festivals and private functions, Smokin’ Gunz has shared the stage with national acts Montgomery Gentry, Gretchen Wilson, Jake Owen, Chris Cagle, Love And Theft, Jeffrey Steele, Casey James, Tracy Lawrence, Sara Evans, LoCash Cowboys, Josh Gracin, Randy Houser, Lee Brice, The Lost Trailers, Cowboy Troy, Pearl Heart, Heartland and Confederate Railroad. Including his responsibilities in Smokin’ Gunz, Robert plays drums, piano and bass at Westridge Community Church in Elgin, IL and played drums at Willow Creek Community Church from 2007 – 2010. Along with freelance projects when available, Robert totals well over one hundred performances a year.

Originally from Cleveland, Ohio, Robert had stops in Boston and Nashville before settling in Chicago. Since relocating to Chicago, projects Robert has been involved with include the country band Six String Crossing, original power pop band The JuJuBees, Steve Laxton, and drummer for the studio Big Sound Audio House. While in Nashville Robert kept busy drumming for the Tom Mason Band, The Mason/Patton Band, The Nashville Cowboy Church, numerous freelance gigs, and touring extensively throughout the US and Canada with various bands. Among the artists Robert has performed with include Johnny Cash, June Carter Cash, Joanne Cash, Connie Smith, Freddy Weller, Skeeter Davis, Ronnie Stoneman, Little Eva and George Hamilton IV, jazz trumpeter Donald Byrd and various singer/songwriters including Jan Buckingham, John Sieger and Greg Trooper. Artists opened for include Webb Wilder, The Honeydogs and John Cafferty and the Beaver Brown Band. In Cleveland Robert worked with, among others, The Shakin’ Snakes, Mark Addison, and the country-rock band Buckshot, which played throughout Ohio, Pennsylvania, West Virginia and the East/Southeast US.

Robert has also had extensive studio experience. Along with numerous sessions doing demos and the occasional jingle he can be heard on the following recordings. Six String Crossing (available on iTunes), Broken the band “Who We Are” 2006, Steve Laxton “Tuesday Night At The Avenue Hotel” 2002, The JuJuBees “Six Pack Of Pop” 2000, Tom Mason “Where Shadows Fall” 1998, The Tom Mason Band 1995. Robert was also the drummer when The Nashville Network filmed a television pilot for The Nashville Cowboy Church.

Along with his extensive professional resumé, Robert received his BA in Music from Cleveland State University. He also attended Berklee College of Music where he was fortunate to take classes from such musicians as drummer Skip Hadden (Weather Report). Prior to that, Robert was at Miami University in Oxford, Ohio where he was member of the Jazz Ensemble, Percussion Ensemble, Orchestra and Wind Ensemble.

When he isn’t busy playing, Robert teaches private lessons in drums, percussion and piano. Although primarily playing drums professionally, Robert actually started on piano before he picked up the sticks. “I really enjoy giving lessons. It helps keep the mind active and my chops up. I don’t want one of students to pass my by. Not yet anyway!”