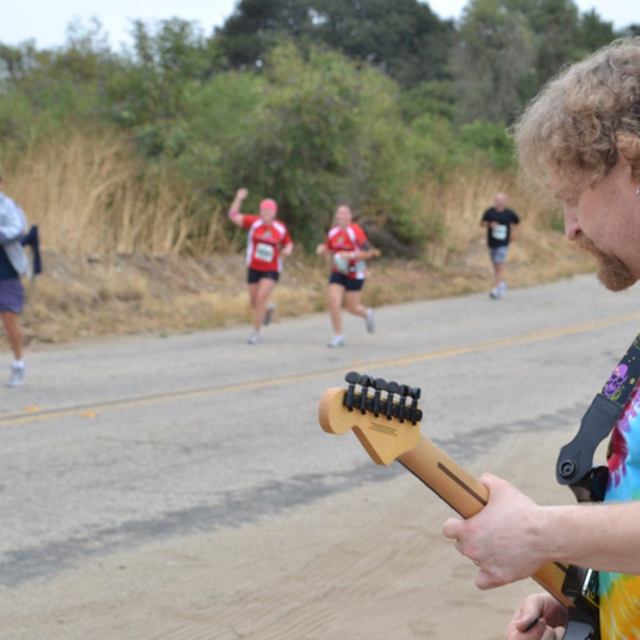 Sept-Oct 2012: Scoring and performing the live theater version of "Night of the Living Dead" at Paper Wing Theatre, Monterey CA.

March 2012: Re-learned the Sousaphone (tuba) for a month and played for a military graduation ceremony.

February 2012: Another Burlesque show at paper Wing Theatre (Sweet-Tarts Burlesque Show). Sold out 2 of the 5 shows.

May 2011: My crossroads didn't last very long. I was selected for the guitarist in "Repo! The Genetic Opera" at Paper Wing Theatre in Monerey, CA in Fall 2010, did a Burlesque show immediately afterwards, then released "Slurpy" in January 2011. IN March 2011, I had my first out of state gig as a metal guitarist in the Big Fish Pub in Tempe, AZ. Then Monterey County Fair in September.

July 2010: I am at a crossroads right now. Within 5 years, I completed all my guitar goals, including 2 CDs, paid performances, unpaid (volunteer) shows, playing the Wharf to Wharf twice (and doing it again this year), and putting together 2 hours of acoustic music and (currently) 1 hour of club-appropriate songs.

In Feb 2010, I learned the beauty of multi-track recordings. Up until then, it was one take, one track. This has opened me up to creating stuff that was a dream a year or two ago. My talent level has also increased, and this also allows me to head where I want to go, which is to incorporate both the acoustic fingerstyle playing with the 80s heavy metal playing.

I'm having a great time on this journey, and I still have so much to learn.

I will be playing guitar instead of ringing the bell for the Salvation Army.

I'll be set up around Mile 5 of the Santa Cruz to Capitola "Wharf to Wharf" 10K Run.