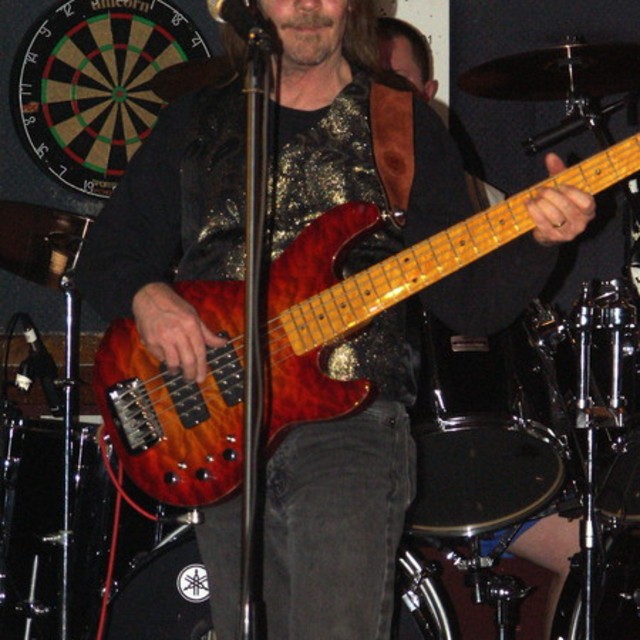 Here's a bit about me and what I'd like to accomplish and some history:

First of all, in case you are wondering, the 1 4 5 jam (obvious) sound sample is of me and a couple of buddies that get together to spill beer with a few times a year. The shorter vamp in E is actually another drummer audition. I've persoanlly thought it no better way to judge a persons abilities than on jamming when steadiness and improv is essential. The Nugent and ZZ samples show my singing abilities. Trust me, I'm not stuck on Clasic Rock, even though the 12 minute medley is all Classic rock from when I was in HellzCounty this past year! I love many styles of popular music from Soul to Metal.
About me:
I've played since I was a kid. I started playing drums so I'm definitely rooted with pocket. When guitar gods surfaced I too followed suit. I Cut my B and E off my Fender Mustang and became a bassist when the older (he had the wheels!) bassist in that band quit. I was 13-14? I've been a bassist since. I've always sang. Rough and pretty. Give me good ballad and I have the girls' attention. Give me a rough and dirty song and I've got everyone's attention. I've been in many successful rock bands from the 70's to the 90's. I also pursued the original rock band record deal from 1987-1994 with several trips to NY city with A&R but the pretty long haired skilled hard rock/metal playing fell out of popularity in favor of Flannel shirts (grunge west coast style). Then there was an R&B Rock style super trio for a while around that time too. Shortly there after came back surgery and a few years later a very bad motorcycle accident and a year or so of recovery. So, I put music behind me for a while.

Of course you can't keep a good man down and for the past two years I've been in and out of a few bands (it's allways something or somebody!) casually searching for great players and jamming with old friends in between. As of late, a stint with a start up Retro 80's corporate band, two classic rock bands all for them to (not at the same time!) disband after one personnel changes or other conflicts and a few personal recording projects for funn as I've no delusions of being being a rock star. Been there...chased that dream allready!

After all the years of experience and time on stages I find myself extremely disgruntled with the quality of players that either respond to adds or turn out sub par when I go to an audition. So I carry on.

My goal is to find a like minded established band or a quick startup that plays a ballance of newer pop, radio friendly dance and some Classic rock covers thrown in for good measure. Of course the intention is get out there and work on stage about 4 times a month, give or take a few. I'm seraching for Guitarists with technical chops and improvisational skills. Others in the band lead singing would be great. I'd hope any group I'm in would be a hot looking and hot sounding band that entertains well. The objective is playing live for money while honing combined skills as a band. I'm not looking at beginners or hobbiest. Iâ??m looking for skilled players that understand it takes at least one night a week of dedication for rehearsal and they have to do theyâ??re homework. Please; a telephone number, an MP3 of some work, pictures or link to web site would be helpful. Iâ??d like to base this out of Northern VA, preferably western Fairfax but am flexible to rehearsal location.
I can be reached at home after 6:00 most days. 703-968-5949.

Are you kidding? Too many! I'm a melting pot of influences. Like I said before, I emulate the song and sound the best that I can. If the song calls for fingers, I use fingers. If the songs has a bright attack I use a pick.